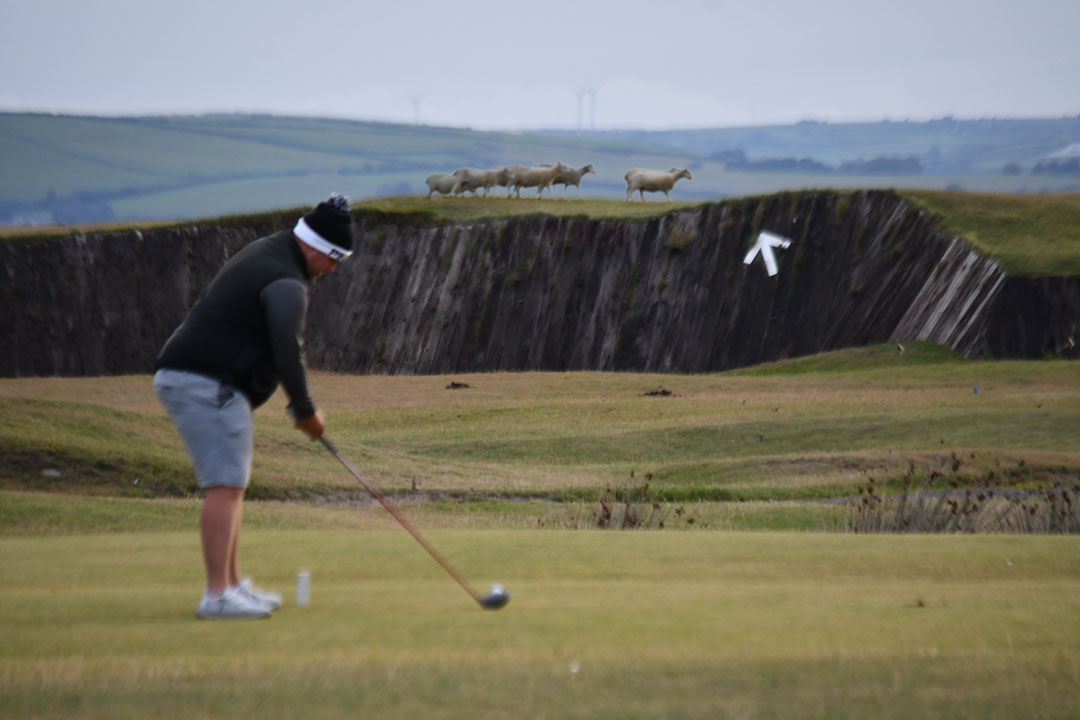 Of the near forty thousand golf clubs in the world, Royal North Devon is one of just 66 clubs that have been given the ‘Royal’ seal of approval. Roughly half of these Royals reside at home in the British Isles, with the other half dotted around the world.

Incidentally it was the Prince of Wales – not the current and dutiful Heir apparent Charles, but the less dutiful Edward, aka Bertie, who took a shine to the club.

Let us now dispense with the Royalties and refer to Royal North Devon by its more common handle, Westward Ho! – formed as a club in 1864 and granted its Royal status barely a year later in 1865. The man perhaps most responsible for the course’s instant acclaim was Old Tom Morris. The then holder of the ‘Champion Golfer of the Year’ title, bestowed to the golfer who records the lowest score in what we now call The Open, Old Tom was fast becoming the most revered course designer of his time. As a player, he was certainly dominating, winning three (1861, 62 and 64) of the first five Opens. In fact, one could argue that Old Tom won three of the first four Open’s since the inaugural Open in 1860 was not actually ‘open’; it was by invitation only for a select group of golf clubs to enter their best professional golfer into the contest. It was not until the following year that the event was ‘open’ to all golfers, be them professional or amateur.

Returning to Westward Ho!, we learn that Old Tom devoted a tremendous amount of time to the course and its development over its early years. In 1860, before the ‘club’ was fully formed, Old Tom spent a month with local Reverend Isaac Gosset, taking much time to study and rearrange the very rudimentary course that existed. Later, in 1864, when Tom returned in a more official capacity, he spent ten days on the project when the norm was two. Reverend Gosset was reputedly a self-styled ‘Apostle of Golf,’ one who presumably learned a great deal from the original golf emissary. He chose wisely appointing Tom – his craftmanship of the links as well as his skill on it, his stature as Champion Golfer and his humility while teaching the locals would spark and sustain their growing interest in the relatively new pastime in England that golf presented and help to establish Westward Ho! as the St Andrews of the South. Old Tom himself clearly had an affection for the place as he returned several times, making his last visit and round of modifications as late as 1887. Aside from a love for the course and its golfers, it is likely Old Tom was perhaps also partaking in the relatively new pastime of a seaside holiday. Westward Ho! the town was also in its infancy and had only been constructed a few years prior to the golf course itself, specifically crafted as a holiday destination resort.

Interestingly, at the same time Old Tom was working on Royal North Devon, he was also making his return to St Andrews. In late 1864, Old Tom left Prestwick after well over a decade of service and made a return to the town where he spent his formative years to become the ‘Keeper of the Green’ for the Old Course. Over the next four decades, Tom would tend to the course, make many important changes to its layout, conditioning and generally help to re-establish St Andrews as the true ‘Home of Golf’. During this time, Tom continued to compete in, and occasionally win, The Open Championship and many other tournaments, exhibitions and challenge matches. He also branched out further into course design, creating or altering close to 100 courses in his time. Aside from Prestwick and St Andrews, it is not unrealistic to think that Old Tom had a real soft spot and a passion for the course and golfers down at Westward Ho!. It is probably no coincidence that the course itself resembles Tom’s pride and joy in the Kingdom of Fife greatly. Royal North Devon offers many of the same great design principles and course features one encounters on the Old Course at St Andrews.

A Scottish golfing pilgrim that made it as far south and west as Royal North Devon would not be disappointed in the slightest to what he or she saw. A mostly flat landscape, but one with many subtle obstacles to overcome. As with most great links courses this means mastering the trajectory and shape of your ball flight while also being confronted with an ever-baffling array of awkward stances. The stretch of holes from the 3rd through to the 10th are fantastic and as good a run of holes as you will find on the British Isles. Here you will find true linksland. Wide-reaching views across the course and out to sea. Crazy hazards like the giant 20-foot-deep bunker on the 4th hole, known as Cape. Mammoth golf ball eating sea rushes. Impressive too is the depth in variety of the holes, the green sites and styles. Like St Andrews, the course is wide and offers the golfer plenty of room to play from the tee, but plenty of strategy in how to approach the greens and plenty of skill and cunning needed to get the ball close to the hole. Perhaps greater than St Andrews, Royal North Devon offers up some breath-taking scenery, such as the view from the high 6th tee. A stunning par four with a rollicking fairway that stretches out seemingly forever, with yet more glorious linksland and the steely ocean beyond. In fact, these fresh seaside holes persist on and off throughout most of this run of holes, a treat rarely offered up at St Andrews. Speaking of treats, don’t forget to stop off at the ice cream van in the adjacent beach car park shortly after you tee off on the third hole. Soak up the atmosphere and general bonhomie that is so acute and palpable on a bright blue day in an English seaside resort. Then, trot off down the fairway without a care in the world, in search of that silly white round thing.

Let us consider the ‘Championship’ pedigree of Westward Ho! Royal North Devon may not have held The Open like many of the other pretenders to the crown of St Andrews of the South, but it has held several other grand events. Royal North Devon was considered highly enough to host The Amateur Championship three times in 1912, 1925 and 1931. Around this time The Amateur was in fact considered a ‘major’. Indeed, it was in 1930 that Bobby Jones achieved his famous ‘Grand Slam’ feat – winning all four majors in a year. Triumphing in The Open, The US Open, The Amateur and US Amateur. At this point in time The Amateur Championship would have been a hugely important event on the golfing calendar. When the Championship returned to Westward Ho! in 1931, it surely would have had the full attention of the golfing world. If you are familiar with the Bobby Jones story you will know that he sadly didn’t travel to defend his title and experience the delights of Westward Ho! for himself as he promptly retired from competitive golf at the tender age of 28. Next time you are suffering from first tee nerves, consider this: Bobby Jones cited nerves as the main reason for his rather hasty and premature exit from competitive golf. Often quoted as being sick to his stomach as a result of the mounting pressure associated with performing to such high standards, Bobby Jones announced his retirement just two months after becoming the first and only golfer to win all four majors in a calendar year. Despite a relatively short career, Jones amassed an impressive 13 major victories. Only Jack and Tiger have won more.

Westward Ho! bumps shoulders and mounds with similarly impressive company when it comes to majors. Outside of the USA only 24 courses have played host to a men’s golf major championship. Yes, 24! Of those, only ten are non-Open Championship hosting courses: Portmarnock, Royal Aberdeen, Royal Porthcawl, Hillside, Formby, Royal County Down, Nairn, Ganton and Royal Dornoch. Of these non-Open calibre host courses only Royal Porthcawl and Formby have hosted The Amateur more than Royal North Devon. You may wonder why Royal North Devon is not more of a household name these days.

The few of you already acclimatised to RAW GOLF know the joys of striking a crisp iron from tightly gnashed turf, where the fairways are kept short by rabbits and other graminivores. For the golfing masses however, this is not something they are used to and may never have experienced before. Travelling golfers that make it into this corner of the golfing kingdom will usually be found across the bay at the much more manicured Saunton Golf Club. Nothing wrong with that; Saunton possesses one of the finest and most challenging 36 holes of links golf in the world. But Royal North Devon offers something different and quite unique in this ever-homogenised world. And don’t necessarily confuse the raw element of Royal North Devon as being something inferior to the more modern version of golf. Far from it.

But to understand what golf is really about, you also need to take a step back. Go to Westward Ho!, leave your titanium clubs and your electric trolley in the garage and bring your old set, the really old set, in fact, just bring half of it in a pencil bag, play the yellow tees, get round in under three hours and still be home in time for tea.

Ben Sargent is a PGA professional and retail manager at The Wisley. He contributes to Golf World and National Club Golfer magazine, specifically their Top 100 course ranking lists. He is passionate about all things golf, especially its history, course architecture and golf travel within the British Isles.