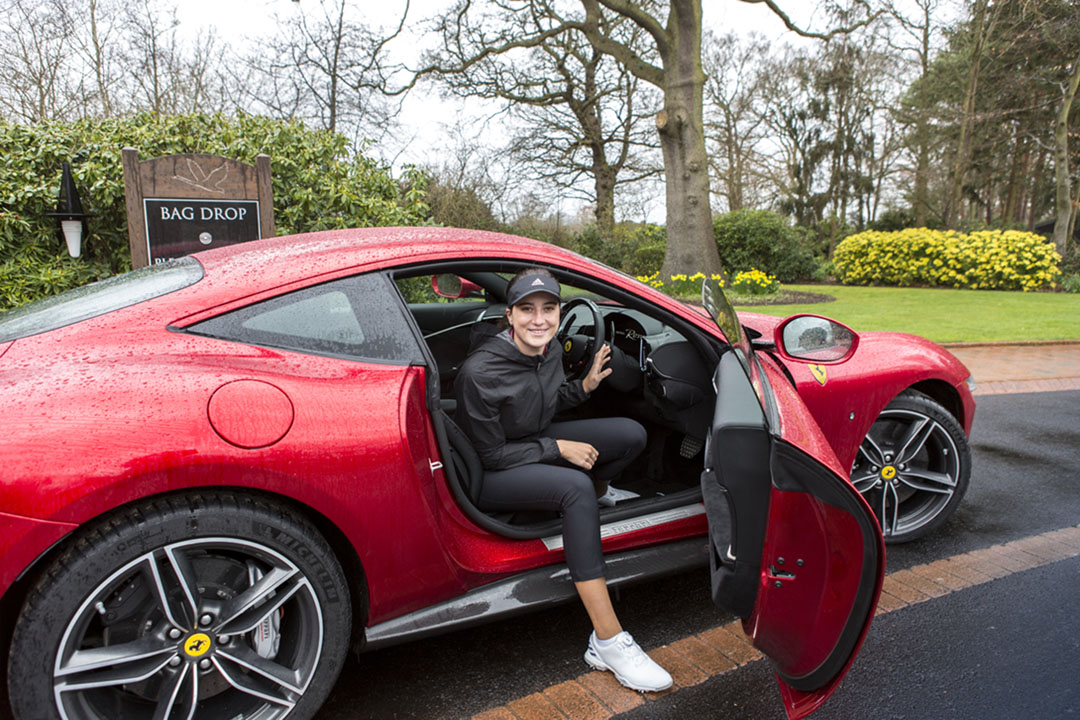 We take up-and-coming golf talent Thalia Kirby for a spin in the Ferrari Roma to The Wisley.

“Are you sure we can fit my clubs in this boot?” asks our future star as we approach our dream car. My reply was a confident “of course,” although I had not tested it before. To my relief we found a hatch in the boot that allowed us to snuggly fit the bag in the boot. In fact there was even space for a couple of overnight bags.

I’m picking up this year’s future star Thalia Kirby, the 20-year-old amateur golfer with a bright future ahead. We have just about an hour’s drive ahead of us to The Wisley. So, plenty of time to find out a bit more about Thalia, her achievements, ambitions and dreams. But let’s first introduce the second star of the story, the dream car.

In Rosso Magma, a red indicative of Italy, speed, power and precision, perfect on a track or the Italian countryside’s winding roads. A Ferrari, of course. Perfect contours, powerful lines, beautifully balanced arches and power domes on the bonnet and a grille that oozes character and confidence, adorned with the distinctive prancing horse. This truly is Italian design at its best. A car that embodies the badge it proudly wears. The Ferrari Roma is a head-turner. Our eagerness to get inside was only partially due to the weather; we also wanted to see if the magic of the Roma’s exterior translates to the experience inside. And we are not disappointed. Style, comfort and simplicity are in abundance within a cabin that is not lacking for technology. A little red switch on the steering wheel gives you four drive settings: WET, COMFORT, SPORT allowing for an effortless drive, and then we have the fourth setting: RACE . I was however firmly told by the guys at Maranello to keep my fingers off the RACE button on this occasion!

I press the start button and the initial roar of the engine quickly settles in a comforting growl. Thalia is guiding me out of the one-way system to the main roads and the chat focuses on how she got into golf. “My Grandad was a keen golfer,” she explained. “Most weekends we visited him, and he took us to Harleyford golf club where he was a member.” Thalia’s brother, who is two years older than her, got into golf first. In the usual brother and sister rivalry, Thalia didn’t want to be left behind. So, at the age of five, she started taking lessons too. And they were both pretty good at it. I learned that neither of Thalia’s parents played golf, so this is all truly down to Grandad.

Thalia was generally sporty as a child and besides golf – tennis, football and rowing were her favourites. She would eventually have to make a decision and focus on one sport when the schedules between the various activities clashed too much. It was between rowing and golf, both time-consuming sports, but golf came out on top.

Harleyford has a strong junior program and Thalia was lucky to have come through the system a few years behind tour star Tyrell Hatton, who gave the program a huge lift. Seeing Tyrell progressing from strength to strength was, of course, a great inspiration. But Thalia also talks about the dedication he displayed, the countless hours chipping and putting that inspired everyone around him to put in the hours too. Being so close to Tyrell and seeing him grow from a junior to number 5 in the world ranking has clearly made an enormous impression on Thalia.

“Last year, I was out in America on my college visit to sign up for a three-year scholarship course at Daytona College in Florida, when I got a message from Tyrell asking me to come down and play a round at Lake Nona with him.” Thalia explains how Tyrell was in incredible form, finishing their round in 9 under (10 under is the course record at Lake Nona). Going to the States wasn’t planned. Thalia got approached by Daytona College completely out of the blue and they offered her a scholarship. She was pretty sure her mind was made up before visiting and what she saw only validated her decision. The campus was great and the girls she met seemed really nice too. It’s fair to say that Thalia was pretty excited at the prospect of joining her new college team mates.

Going back to Thalia’s early golf, it was the Buckinghamshire County program where she was introduced to competitive golf – starting with par 3 tournaments and gradually working her way up to the bigger events. Thalia was conscious that she was often the only girl competing at tournaments; luckily it wasn’t an issue for her. However, she can see how it would easily put other girls off, and she is hopeful that clubs take a proactive role to encourage girls and women to play golf. “It is so important to see role models you can relate to,” she says.

At 13, Thalia won the Buckinghamshire Championships. That gave her the first real taste of the thrill of winning. Thalia retained the title the following year. At 15, she played off scratch and now she is playing off +4. Incidentally, Thalia holds the course record at Harleyford at 3 under and her best round ever was at Sunningdale – the new course – where she shot an impressive 5 under par.

We muse over the car’s performance while The Wisley greens glint, in the way only a perfectly manicured lawn can. The conversation turned to how Thalia prepares for a tournament or a high-pressure round. They say the young don’t feel nervous as much, but Thalia feels to have some nerves is a good thing. “Pressure is a privilege,” she says. Of course, a little flutter on approaching the first tee is always going to be there. Thalia explained how she used to suffer from terrible nerves to the point where she had ‘performance anxiety’, which almost stopped her golf career. Luckily, with support from various people, including her coach Zane Scotland, she turned nerves into strength. Her rigorous pre-match routine is the process of putting her mind and body into optimal place.

Thalia’s first introduction to representing England ended in disappointment. At the age of 12, she first trialled for the national squad, but sadly was rejected. Although devastating at the time, Thalia feels today that it was an important driver. It helped her to realise her desire to represent her country. And it clearly paid off as Thalia is today a member of the England lady’s squad. “Training with the England squads, both the girls and now the women, has been amazing.” Thalia talks about her experience of playing on the international stage and has particularly fond memories of a tournament in Germany. This exposure has been the trigger for Daytona to offer the scholarship.

Things took a very unexpected turn – shortly after Thalia’s visit to Florida, the world was thrown into turmoil with the spread of Covid-19. It’s fair to say that Thalia had imagined her fresher’s year to be drastically different and definitely more exciting than it turned out to be. “I have been at uni for a whole year, but not once met anyone in person after the initial visit at the end of 2019”. Being enrolled with an American college makes it really difficult when taking part in remote lessons as they often carry on into the night because of the time difference. This August, Thalia will hopefully be able to fly out to Daytona and experience the college properly. She is looking forward to measuring herself against an international group of girls, something that will help her prepare for when she is on LPGA tour. Yes, that’s firmly in her sights, but there is still plenty to achieve first, not least finishing college.

Currently 600 in the world ranking, Thalia wants to climb the ladder. Her goal is to get into the top 50, so that she will get invited to play Augusta Women within the next four years.

“I might even treat myself to a nice car when I get there,” Thalia laughs. The drive in the Ferrari certainly inspired her. Thalia told how she got into F1 watching Drive to Survive, the Netflix series. Of course, the Roma would be a bit of a step up from the Toyota Aygo she is driving at the moment. One day.

Many thanks to Thalia Kirby for giving us an insight into her life as a golfer. Thanks also to Maranello Sales (Surrey) for providing us with the dream car, the truly stunning Ferrari Roma, and of course, thanks to The Wisley for hosting us!

Sam Oliver is a PGA professional and Membership Director at The Wisley. In his role, he is responsible for marketing, building brand partnerships and ensuring members and their guests enjoy the ultimate golfing experience.