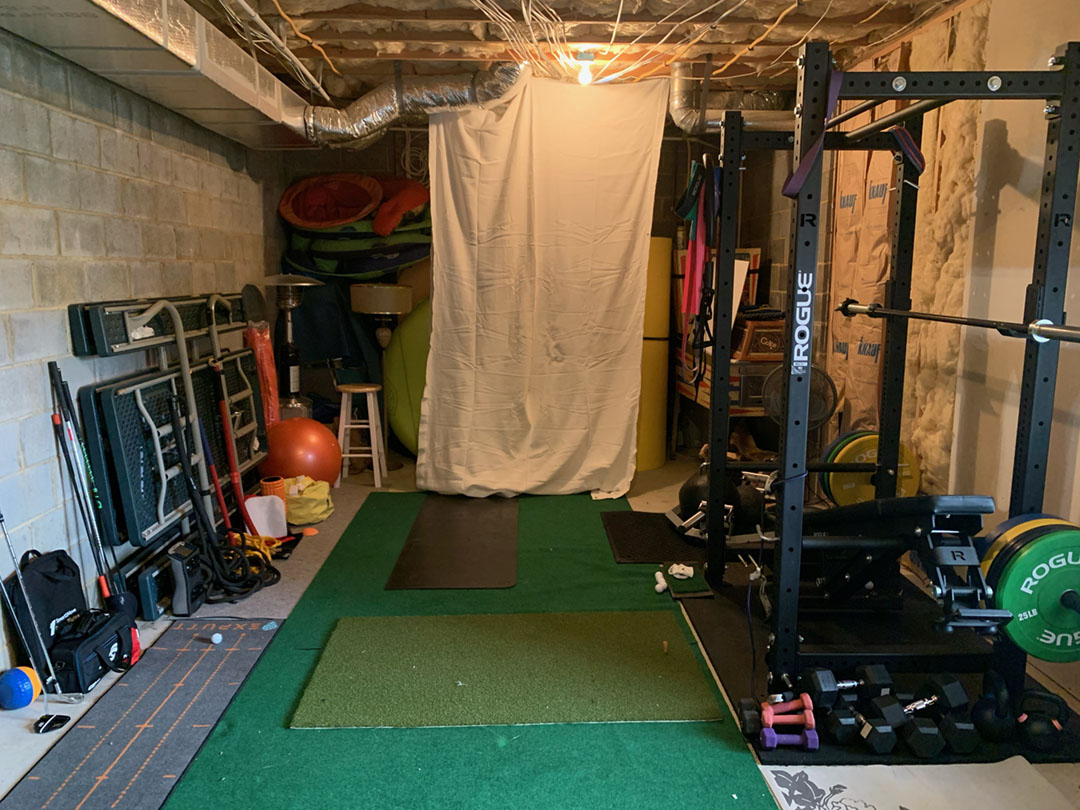 Challenged, but certainly not beaten. We spoke to three golfers who found their own ways to progress their game despite lockdown.

Many might presume that a touring professional must have a suitably expert-level practice facility at home. Yet, real life is rarely so straightforward.

“I ordered a net online, but it took ages to arrive, so I made my own makeshift net,” the 28-year-old Englishman tells us. “I had a clothes rack with a bed sheet over it, and I was hitting balls into it off a doormat. It got quite interesting.”

Full marks for ingenuity. Fellow European Tour pro Oli Wilson took to re-arranging the furniture at the home of what sounds like very obliging in-laws in North Carolina.

“I commandeered the basement and pushed everything to the back of the room to make way,” explains Wilson, 40, who played on the European Ryder Cup team in 2008. “As soon as we realised what was happening [with lockdown], I basically bought a gym and set it up, and I set up a net and a mat. I call it the dungeon.”

Except the first net Wilson bought wasn’t up to tour-level ball speeds. “I bought the first net online and it was terrible. It lasted about five shots before it started to fall apart. I kept folding it over to cover the holes, but each time I did that the net became smaller as a target. I made it work for a while, but then I ordered an archery net [pictured] and hung that up.”

So, have you broken anything? “There might have been a couple of incidents, but I can’t go into them,” laughs Wilson. “Nothing that can go on record.” Don’t mention it to his in-laws, whatever you do.

Meanwhile, Smith completed a house move during the spring lockdown, from Corsham – near Bath where he grew up – to Chobham in Surrey. At the old house, Smith had at least an artificial putting green in the back garden, complete with gentle contours. Once he moved into his new home, the lockdown putting practice was relocated to a 14-foot indoor putting mat, just like countless other lockdown golfers.

And it turned out the sheet-and-clothes-rack combination was more resilient than expected.

“It actually worked out surprisingly well for a couple of weeks as proper nets were sold out everywhere and the one I ordered took ages to eventually arrive,” recalls Smith, winner of the Porsche European Open in 2017. “Admittedly I couldn’t hit a too lofted club as the ball would just go over it, but I never missed the bed sheet to be fair.”

The doormat, however, took a pounding. “It lasted the best part of a couple of days before bits started to come loose. Eventually it just fell apart,” adds Smith.

Smith’s proper practice net for the garden finally arrived, while his home gym was transferred from the old garage to the new.

“The challenge of lockdown was to find things to do to keep my golf game ticking over,” explains Smith, who was just finding some consistency on the European Tour’s swing in the Middle East when lockdown scuttled the tournament schedule. A finish tied for 6th in the Oman Open at the beginning of March was evidence of emerging form.

“I tried to do little bits each day to keep me going. Then Trackman came up with this online competition with Sky Sports, which meant we could hit balls with the Trackman radar and play a virtual round of golf. I ended up doing that for four or five weeks, competing against other European Tour pros and that was quite good fun and it kept the competitive spirit going.”

To most serious golfers, keeping fit for the game is about more than just swinging a golf club. Jonathan Joseph (aka DJ Spooney) lives in a flat in Hornsey, north London, and while this seven-handicapper’s clubs gathered dust during lockdown, he concentrated on golf-specific strength and conditioning.

“I have not bulked up like Bryson [DeChambeau], but there are a couple of elements in his science that I have incorporated into my exercise, because with greater strength and stability you can really explode through the impact area of a golf swing while keeping your balance. The aim is to swing with greater speed while keeping your balance and a lot of that comes down to core strength.”

DeChambeau, who claimed the first major title of his burgeoning career at the US Open at Winged Foot last September, has physically bulked up dramatically over the past two years. He drives the ball in tournaments like he is in a long-driving contest as part of a strategy to overpower golf courses. He was statistically the longest driver on the PGA Tour in 2020 with an average of 322.1 yards per drive.

“Bryson says he does very little compound training, and that most of his strength training is specific to certain areas, and this is something I have been working on with my personal trainer,” explains Joesph. “During lockdown I stayed in touch with my PT online, and there are single-arm exercises which I didn’t do previously and some single-leg work that really helps your core and stability. I have increased my strength a little and I can feel there is less wobble through the impact when I swing fast. That gives you more confidence to hit the ball hard and to be more aggressive because you know you are going to keep your balance.”

Joseph has reaped the benefits of some impressive lockdown focus and discipline, and he is not the only one who saw lockdown as an opportunity to increase strength and swing speed.

“Three of four times a week, I would work out with my personal trainer via Zoom,” says Wilson, who had been struggling with his driving on tour. “It was great to have someone there to push me. When you are in a gloomy basement on your own it’s not easy to get motivated, but I did some excellent work in the gym, got stronger and a lot faster.”

Wilson added 20 yards to his driving distance over lockdown, working with his trainer and swing coach in the ‘dungeon’ via Zoom, while Smith also endeavoured with strength training once his gym equipment was set up in the garage of his new house.

“Once I get into the routine with the gym work I quite enjoy it,” he says. “It can be hard when you have not done it for a while, but it is a key part of the game now. 99 percent of golfers on tour train in the gym and it’s clearly beneficial for your game if you want to hit the ball further and straighter.”

Wilson and Smith, like amateur golfer Joseph, each have their own ways of forging self-improvement, yet in lockdown they shared a common ambition to increase their swing speed, one way or another.

“Tiger [Woods] was the first golfer to train as hard as athletes from more physical sports like football, American football or basketball,” adds Joseph, who played amateur football in London at a high level before DJ work and golf took over. “Tiger revolutionised the game. People were saying that golf is not about going to the gym and they were questioning him, but eventually the game caught up, going to the gym became standard for tour golfers and now Bryson has picked up the baton and is doing things his way, taking it a step further. When you are the first person to do something, you are always going to have doubters and critics.”

It will be fascinating to see if the hard work pays off for these golfers in 2021. Joseph would like to get his handicap down to five if he can find enough time to devote to his game, while Wilson and Smith are both dead set on returning to winning form on the European Tour. We wish them well.