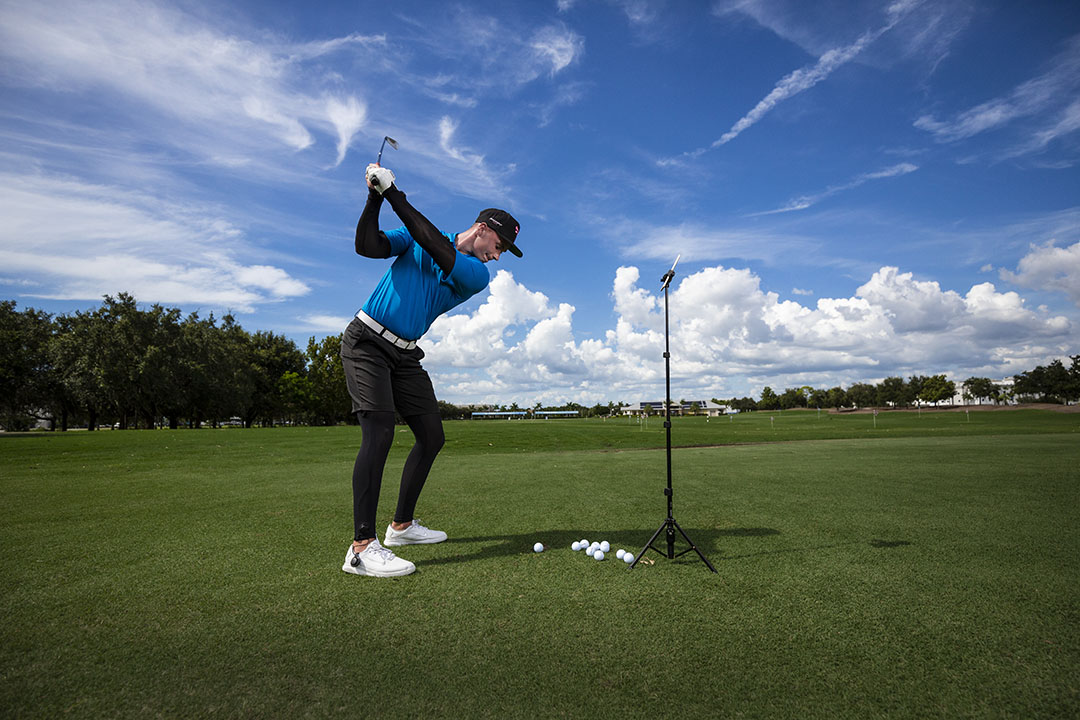 As a new decade of golf gets underway, Robin Barwick goes in search of some kind of technological advantage – anything that works as long as he can wear it.

The biggest sales pitch bonanza in golf is the PGA Merchandise Show every January at the vast Orange County Convention Centre in Orlando, Florida. The major brands try to eclipse one another with duplex show stands. They bring in security teams to guard the stand entrances to raise the sense of exclusivity and to persuade their rivals and customers alike that their latest unreleased technology is so ground-breaking that it requires military-grade protection. The show floor is loud, bright and bustling – a marketing cacophony.

Yet, every year at the PGA Show, the most engaging enclosure is stuck in the corner, stripped of the marketing millions. Sitting timidly behind by a plain black curtain, the Inventors’ Spotlight Forum is where start-up firms and whacky inventors each stand by a fold-up table in their allocated space of 12 square feet, filled with hope and desperate for just a pinch of the attention sucked up by the big boys and their four-way video towers.

The Inventor’s Forum might feature a cup that never lets a cold drink get warm, training aids to strap to one limb or another, a glove that never rips, a grip that never slips. You never know what you will uncover behind the black curtain, and once in a while, like in the old California gold rush, you get something really precious.

Back in January 2019 in the show’s Inventors’ Forum, an English company called Guided Knowledge introduced its new product – Dragonfly Golf – which brings 3D motion capture technology to golf through a base-layer suit and 18 sensors. So striking is the technology and its ease of use that Guided Knowledge left the PGA Show with the Pinnacle Award for the best product in the Inventors’ Forum.

“We are taking the power of a motion capture studio and putting it into the palm of your hand,” starts Trine Hindklev, chief marketing officer for Guided Knowledge, which returned to Orlando this year to take its place on the main exhibition floor. “We are taking the technology of a motion capture studio and making it more accessible, more mobile and far more affordable.”

After five years in development, for wearable technology in golf, this feels like the leading edge.

The Dragonfly Golf sensors feed into a pocket pod which processes the data and from there, a 3D, 360-degree replication of the golfer’s swing appears immediately on a smartphone or tablet via the Dragonfly app. From every golf swing Dragonfly picks up 360,000 pieces of data to ensure peerless accuracy and to allow a golfer or coach to analyse each swing with a level of detail not previously seen.

Dragonfly enables a golfer to record their unique golf swing signature which can then act as a performance benchmark. Golfers can then compare swings in 3D motion and pinpoint changes between one swing and another.

“I was blown away when I saw what Dragonfly Golf can do,” starts former Walker Cup and European Tour golfer Sam Hutsby, who is now an ambassador for Dragonfly Golf. “Where Trackman gives golfers the ability to analyse data around a golf shot and the ball, Dragonfly enables golfers to track their own physical performance with incredible accuracy.”

“All golfers slip into bad habits from time to time. It’s an inevitable part of the game. With Dragonfly, you can have all of your swings captured, which allows you to compare your swing of today with a previous swing and exactly identify what the differences are. This is a game-changer for golf coaching.”

With a price tag of $15,000 for the first year in the United States, followed by an annual $3,000 subscription fee, an early adoption programme is currently available in the UK with a 50% discount. Dragonfly Golf is presently aimed primarily at elite-level golfers with a mass-market, more affordable version in development.

“I wish we could have had this technology 20 years ago when Tiger Woods was in his prime,” adds Hutsby. “It would have been fascinating to have got Tiger into the suit back in his prime around 2000, and then compare and contrast his golf swing in later years as he got older and injured and his swing had to change.”

Dragonfly Golf is not the first product to offer golfers a 3D swing replay, but it takes 3D motion capture in golf to a new level.

Other impressive 3D modelling systems in golf include the HackMotion Wrist Sensor, which is distributed in the UK by Sheffield-based MIA Sports Technology. As the product name implies, HackMotion is designed for coaches and golfers who want to zoom in on the wrist action of a golf swing. The Wrist Sensor unit is as comfortable to wear as a wristwatch – very light but just bulkier – and after every golf swing, it delivers 3D wrist movement data to a digital device via a Bluetooth connection.

HackMotion has modes for the full swing, short game swing and putting stroke. The app provides data tables with session averages on wrist angles and motion; it organises the data into graphs and can show golfers replays of their wrist action through a 3D model. It also compares the golfer’s wrist action with data from elite players.

As it focuses on wrist action alone, HackMotion offers a fraction of the data of the full-swing capability of Dragonfly Golf, but then it comes at a fraction of the price too, with a UK price of £635 including VAT and shipping.

The MIA Sports Technology product range is a mine of fascinating gadgets.

Extending the theme of wearable tech is FocusBand, which is a brain-sensing system that trains the golfer to find a calmer state when playing golf shots.

The brain emits different frequencies as people perform various tasks. When a golfer wears FocusBand around their head, it picks up these frequencies and transmits them to an avatar display on a mobile device. To help golfers cope with occasions when frequencies indicate too much activity, FocusBand provides quick steps to help return the brain to the optimum state of calm.

It might sound far-fetched, but FocusBand does work. The process just takes some practice and practice takes time.

The biggest obstacle for FocusBand in terms of availability in the UK is that it only comes as an optional extra with the Flightscope radar tracking system, which measures data including shot distance, launch angle, club and ball speed. It is ideal for coaching and custom-fitting golf clubs. The theory is that golfers can receive split-screen feedback via Flightscope, with real-time, audio-visual neurofeedback from FocusBand on one side of the screen, with the radar shot data on the other side.

Stepping away from brain frequencies and moving on to the realm of wearable GPS, there are two products for 2020 that particularly catch the eye.

There is a different golf-specific GPS watch for every hour of the day but perhaps none that matches the chic appeal of the Connected Modular 45 Golf Edition from Tag Heuer. Pairing with the Tag Heuer Golf app,
golfers can access three-dimensional hole-by-hole maps for more than 39,000 golf courses worldwide, while the smartwatch collects performance data such as shot distance (accurate to within a metre) and can keep score.

The touchscreen of the smartwatch is coated with scratch-resistant sapphire crystal while the sandblasted case and case back are made from black PVD titanium. Tag Heuer promises a battery life of 25 hours and 4GB of data storage, while this Golf Edition has the same additional functionality of other Tag Heuer Connected watches, in terms of sending messages, receiving notifications, playing music and utilising other apps.

The second GPS item to consider is the latest development from Arccos Caddie, a golf GPS app with sensors that fit onto the end of each grip in a golfer’s bag, to measure the distance of each shot played. After a breakthrough year in 2019 which saw Arccos surpass 300,000 registered users and four million rounds played, for 2020 the company has introduced connectivity with smartwatches, meaning golfers can receive GPS and shot data through their watch.

Arccos Caddie has taken a step beyond conventional golf GPS offerings to bring artificial intelligence to the golf course. Once a golfer has completed five rounds of golf with the Arccos sensors installed, Arccos combines the collected shot data with GPS golf course information to make club recommendations on each shot. New Precision Pin Positioning capability for this year is also improving the Arccos support for approach shots, chipping and putting.

Club suggestions are not the only way the Arccos Caddie behaves like a real caddie. For instance, if a golfer takes the club selection advice, fluffs the shot and then verbally abuses the smartwatch, it will display admirable restraint and ignore its boss. That is what you call tour-level performance.