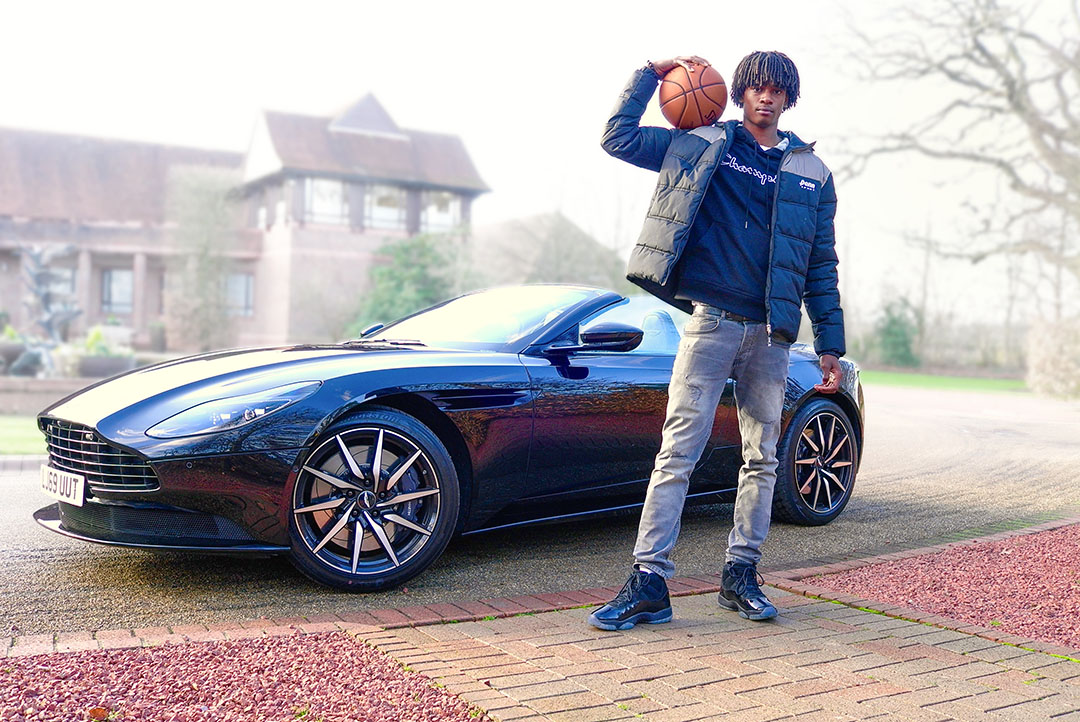 Crawling along the streets of a residential estate in South London, we are looking for the address of Josh Uduje, a 17-year-old basketball hopeful, and we can’t help but stand out. We are picking him up in an Aston Martin DB11 which is more likely to be seen adorning the charming streets of Chelsea, Knightsbridge or Mayfair.

The engine’s low growl gets curtains twitching. Those prying eyes are not disappointed when the sleek athletic lines of the Aston glide past their houses. This car clearly has a magnetic presence, and as Josh comes bounding out of his front door, basketball in hand, it is obvious that he possesses similar qualities. 17 years old and standing at 6.5 foot, his frame alone is commanding. He greets us enthusiastically with his disarming smile before we all join in admiring the effortless beauty of the Aston Martin. We take a lap of the car and marvel at everything from the distinctive DB11 radiator grille and the iconic clamshell hood, right to the signature tail lights. It’s time to jump in, and to my relief, Josh’s substantial frame fits comfortably in the Aston Martin’s elegant cabin. There’s a spontaneous pause in conversation when the Aston engine starts with its distinctive purr. As we pull away and head for The Wisley, Josh begins to tell us of his own journey, which has taken him from the very streets we weave through to ones much further afield. Josh is currently studying at a high school in New York, which has long been synonymous with basketball.

As we switch from the small winding back streets to the surprisingly empty motorway, we finally get the opportunity to tease the Aston out of crawl mode. A nudge on the accelerator and the DB11’s twin-turbo engine graciously obliges to demonstrate the power it has at its disposal. Accelerating from 40 to 70 mph has never sounded this satisfying. Sadly, it only takes a few seconds before we have to pull back from the throttle to avoid breaking the law.

As we glide along the motorway, Josh tells us about his meteoric rise, even though it has not been as smooth as you might expect. In the beginning, his pursuit of basketball was met with resistance. Josh was a promising rugby player, but in truth, like many young athletes, his mix of speed, strength, coordination and competitiveness could translate to many sports. His interest in basketball was sparked by the popular video game ‘NBA 2K’. “I bought a game of 2K while I was on a rugby tour in Spain,” he tells us, “that was the first experience I’d ever had of really playing a basketball game. I was about 14.” Inspired by the video game, he thought: “This is really cool, and it can’t be that difficult.” He was right. While he began to find his feet on the basketball court, Josh continued playing rugby. His interest and ability in basketball increased and so did the demands of juggling both sports. He would play a rugby match in the morning and run straight to a basketball game afterwards. Josh became aware that playing both sports was not conducive to his development, and so his rugby career was to be the casualty in his pursuit of his newfound love for basketball. His rugby coaches initially didn’t approve, and Josh had to continue the juggling act, but eventually, as his stock on the basketball court rose, there was little they could do to keep him on the rugby pitch. His strong work ethic and natural talents did not go unnoticed: “Towards the end of year 11, I was selected to play in the Team GB under 16s, and I went to the European Championship. By the end of the tournament I was playing really well, and I got some interest from American High Schools in places like Louisville, Kentucky and North Carolina. The European Championship finished around August 24th, so when I got home, that’s when all the offers came in. I basically had three or four days to decide whether I was going to stay in England or leave for America. At that point, I was pretty overwhelmed. I knew I wanted to go to America. This was my dream. And when all the offers came in, I asked myself ‘am I ready for this?’ ”

Most 16-year olds would probably have jumped at the opportunity. But Josh made a remarkably mature decision and decided to stay and continue his development here in the UK. Having spent some time with Josh, we get the sense that this polite, well-articulated and engaging young man is fully aware of his achievements and yet, he remains unfazed. Josh attributes his ability to stay grounded and level-headed to his family. Having only just returned the day before our interview from visiting family in Ghana, Josh tells us of the importance of family and friends in his life and that he is blessed to be surrounded by such a supportive group. The decision to remain in the UK seems to have been a good one. Josh has been selected for another GB European Championship, this time for under 18s. His talents were recognised by NIKE who scouted him for the hugely successful ‘Nothing Beats a Londoner’ advertising campaign that features a host of stars and athletes alongside aspiring young talents hoping to become the stars of the future in their respective fields. Later, Josh competed in the DENG 2019 camp for the top 50 basketball prospects in the country. His talent and determination shone again, and he earned himself the number 1 ranking.

After all these successes, accolades and a year of strong personal development, Josh felt ready to continue his development in the US, where basketball is obviously a much bigger sport and with that comes a much larger competitive field. Being thrust into a new country, a new school far from home, without the supportive network of family and friends would be a challenge for any young person. Josh seems to have adjusted well to not only the bigger pond but also to the bigger fish he now finds himself measuring up against.

As we pull in to The Wisley and we drive past the manicured greenery, talk turns to the future. Josh informs us that he already has offers from US colleges and he weighs up his options. Prioritising sport and education, Josh gives away no indication of where he wants to go, other than his remark of “somewhere sunny and warm” delivered with a trademark cheeky smile. Parked up at The Wisley, we walk to the restaurant to feed our hungry, future star. Sam Oliver, the Membership Director warmly welcomes us to the club. Over a fabulous and healthy lunch, Josh speaks more about his new life in New York, the friends he has made and how he enjoys exploring New York on weekends. After lunch, Sam takes Josh over to the Performance Centre for a chance to swing a golf club. On the short walk there, we pass a superstar in the shape of 2018 British Open Champion Francesco Molinari who just finished his mornings’ work in the Performance Centre. As they walk past each other, a nod of heads is exchanged as if, although unaware of the other’s achievements, they each saw the aura of dedication and determination most athletes naturally emit. Josh approaches the Performance Centre excited, wanting to see how his skills on the court could possibly translate to swinging a golf club. His attentiveness and desire to learn is evident as he observes Sam’s simple demonstration of the perfect golf swing. Josh is hitting a few golf balls himself and you can see the enthusiasm which he is taking to a new sport. His only previous exposure to golf was a trip to the driving range with a friend. His eagerness to learn is palpable and could very well be the reason, along with his natural ability, he has managed to adapt to new sports so quickly.

Before we leave The Wisley and the Aston behind, we want to capture a few photos. With the Aston gleaming in the sunlight, we find a backdrop for the photoshoot and Josh steps into frame, clearly at ease. It seems that being in the limelight comes naturally to him. Even though there may be many pieces that need to fall into place, we can’t help but feel that Josh has a very bright future ahead of him.

Many thanks to Josh Uduje for giving us an insight into his life as a basketballer. Thanks also to Aston Martin Walton-on-Thames for providing us with the dream car, the truly stunning DB 11, and of course, thanks to The Wisley for hosting us!

Conrad Jones is a writer and comedian from Dublin, Ireland. He enjoys writing creative pieces and articles as well as scripts and advertising copy. His latest contributions can be read on the NextUp comedy blog, Stellar Underground, and now Upswing.