A (Time) Piece of History 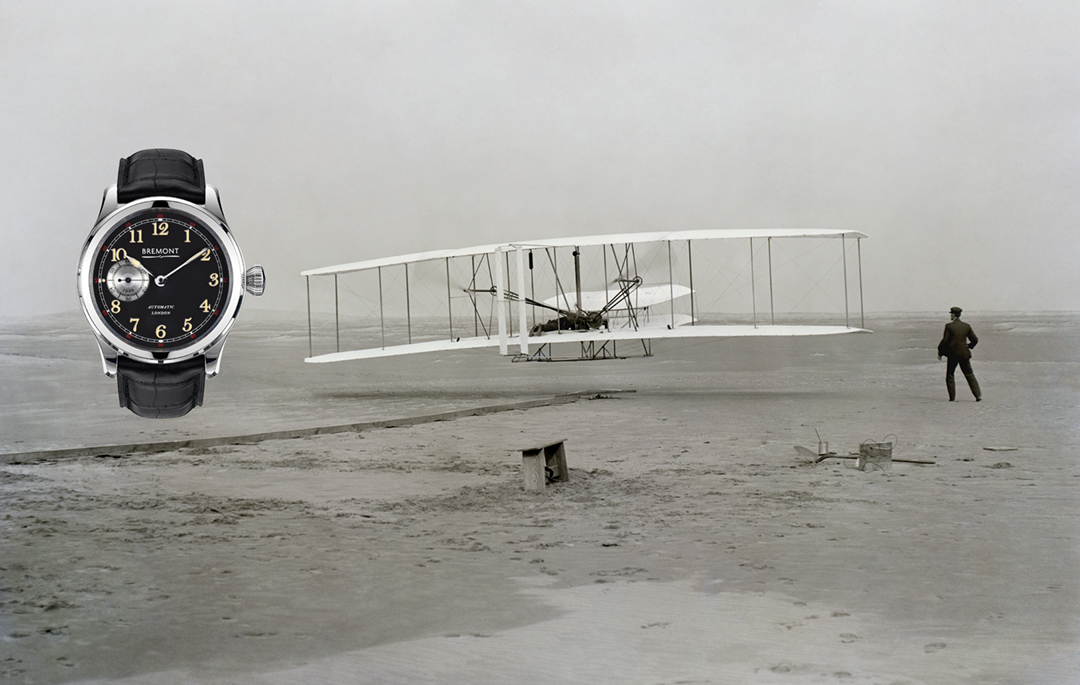 On 3 December 1903 Orville Wright lay face down on the lower wing of the first ever engine-powered aeroplane prototype. Moments before history was made, he turned his head, eyes directed towards the sky above. He wanted to be up there, among the birds and clouds. Give mankind wings.

Just seconds later the machine moved along a single rail on the ground. The heavy seaside wind of Kitty Hawk picked up its muslin-clad wings and, with the help of the propellers, lifted it off the ground. This flying machine was called the Wright Flyer I – and it kept on flying.

The late 19th century was an age of invention. Mankind wasn’t just taking steps towards the future any more – it was leaping. The telephone, escalator, motion picture, typewriter, and even vaccines were all invented just before the turn of the century. New patents were filed at a rapid speed by the brightest thinkers of the age.

However, one challenge remained. Even though many had tried, humanity was still unable to fly.

Orville and Wilbur Wright grew up witnessing the desperate struggles of aeronautic pioneers. It was a frustrating challenge, depressing even. While many managed temporarily to glide through the air, no one had ever mastered the task of controlled flight. With great engineering skills and a relentless spirit, the Wright brothers decided to tackle the task of human flight themselves. Their lifelong fascination with the prospect of conquering the skies turned into obsession. Arguments, sleepless nights, exhaustion. Their quest seemed impossible; several times they nearly reached their breaking point. “Man will not fly in a thousand years,” Wilbur, the older brother, had remarked in 1901, after yet another soul-crushing failure. Only two years later, the Wright Flyer I took off. It was the first ever engine-powered, fully-controlled flying machine.

It is this spirit of determination that brothers Nick and Giles English, the founders of luxury watch brand Bremont, wanted to capture in their Wright Flyer limited edition collection. Just like Orville and Wilbur, Nick and Giles grew up fascinated by flight. Their father had been a pilot, too. He tragically lost his life during a practicing session for an air display in 1995. He wasn’t the only one involved in the fatal accident – his son, Nick, had been on the plane with him. Nick broke over 30 bones when it went down. Miraculously, he survived.

This marked a turning point in the lives of the English brothers. They decided to devote their lives to something they truly loved: the engineering and creation of technically challenging yet aesthetically pleasing objects. Beautiful, intricately-made watches. Just like the Wright brothers they had a mission: to bring luxury watchmaking back to the United Kingdom, the birthplace of many of the most game-changing inventions in the creation of timepieces.

But how does one create a watch that represents a truly meaningful tribute to the history of aviation? This is the question that Nick and Giles asked themselves. The answer? Put a piece of the first ever aeroplane inside it.

When the English brothers first approached Amanda Wright Lane, the great-grandniece of Orville and Wilbur Wright, they were turned down. Too many times the Wright family had received similar offers, all of them driven solely by commercial gain. Only when she learned the English brothers’ story and their many similarities to the Wright brothers did she agree. She knew that Nick and Giles understood the meaning of the Wright brothers’ achievements. As fellow brothers, pilots and engineers, they had the right mindset to create a tribute that would do them justice.

This is how they acquired a piece of the original muslin that covered the Wright Flyer I’s wings on 3 December 1903. The first ever controlled aeroplane took off four times on that cold, windy day. It marked a turning point in the history of mankind. It is a symbol of the determination, relentlessness and willpower that went into creating the Wright Flyer I. Priceless material that can never be replaced.

And still, Nick and Giles were not solely interested in the rarity and subsequent value of the muslin. It was the story behind it that remained the most important aspect. Storytelling is, indeed, a part of Bremont’s very core. The watches in the Wright Flyer series are neither the first nor the last to incorporate meaningful authentic material. Bremont also have created watches with parts of the P-51 Mustang fighter plane used in World War II, and oak, timber and copper from the warship HMS Victory. Their latest historical release, the Supersonic series, was introduced in October 2018. It is made with aluminium from Heathrow Airport’s last remaining Concorde: the G-BOAB.

Previously, parts of the Wright Flyer I’s muslin had only ever been given to prestigious institutions and people who were makers of history themselves. In 1969 Neil Armstrong had carried a piece of the muslin with him during humanity’s first ever lunar landing. It was a gesture of gratefulness and admiration for the Wright brothers’ achievements. Without Orville and Wilbur’s inventions and insights, Apollo 11 could never have been engineered. One giant leap for mankind, indeed.

Professional golfer Ian Woosnam must have felt like a man on the moon, too, when his home country Wales was repeatedly confused as a part of England during tournaments in America. Wales simply hadn’t surfaced yet on the global map of professional golf. This, however, was about to change with Woosnam’s performance at the 1991 Masters in Augusta, Georgia.

It was a warm, sunlit evening on 14 April 1991 at the Augusta National Golf Club. The crowd that had gathered around the 18th hole had become frozen in silence. Everyone was waiting for the Welshman to take his shot. He was dressed in red-checked trousers, a navy blue shirt and white shoes. An outfit that, even amongst the brightly-dressed crowd, seemed daring. Hundreds of eyes were watching him, and it was as if he could feel every last one of those stares.

Eventually Woosnam took position for what he hoped would be his final shot. A few practice swings, just to get the feel. It was in this moment that he thought to himself: “This is your time, step up.” He could feel the desire to win in every fibre of his body. He needed this, needed to prove to the world that he was better than everyone else. A step closer to the ball. This time, the putter would connect with the ball. A careful, controlled swing.

The ball rolled as if in slow motion; it felt like time was standing still.

Woosie, as many call him, could tell even before the ball reached the hole: he had done it. It was official: he had just won the Masters.

As with most great stories, Woosnam’s wasn’t just written overnight. Starting out as a young professional golfer, Woosnam and a friend travelled to European tournaments in an old camper van. Dinner usually consisted of beans on toast because that was all they could afford. Whenever he ran out of money, he had to go back to working various jobs for a while. He was used to working class life having grown up on his parents’ farm, where he and his brother helped out as much as they could. His exceptionally strong golf swing is often attributed to the many hay bales he had to lift during this time. Most likely, though, it can be traced back to the boxing lessons his father gave him.

It is just fitting then, that Jaermann & Stübi have partnered with Woosnam to create a limited edition watch, as the Swiss watch manufacturers create timepieces with a strong shock absorber made with the impact of golf swings in mind. Similar to Bremont’s Wright Flyer series, Jaermann & Stübi’s Ian Woosnam Watch WO1 is made with an irreplaceable material: in order to create something truly special Jaermann & Stübi have melted down the original golf club heads Woosnam used during the 1991 Masters. It takes a temperature of roughly 1,200°C to achieve this – knowledge they obtained after collaborating with the best metallurgy specialists in order to come up with the perfect conditions for turning club heads into watch cases.

Urs Jaermann and Pascal Stübi have always had something special in mind when they came up with concepts for Jaermann & Stübi watches. Called ‘The Timepiece of Golf,’ the watches come with a patented Golf Counter complication. There is one counter for strokes per hole, a second counter to keep track of total strokes per game, and a retrograde counter to display holes played.

It is, however, not just the technical aspect that makes their watches the timepieces of golf. Urs and Pascal seek to create watches with “a special aura,” ones that truly capture the spirit of golf and pay tribute to the sport’s legends – such as Ian Woosnam. The design of the watch they have created in collaboration with the 1991 Masters champion is inspired by Woosnam’s unique outfit in the colours red, blue and white. It is also decorated with Woosnam’s signature on the watch face.

To the high-end watch manufacturers luxury does not simply mean that something is expensive. It needs to be more than that. Rare. Exclusive. Limited. This is why there are only 72 of the Ian Woosnam watches. They share this idea with Bremont, who have limited their Wright Flyer series to 250 pieces for the stainless steel version, 100 for the rose gold one, and 50 for the white gold watch – the rarest in the series. But Jaermann & Stübi and Bremont have more in common than the limited numbers of their creations. Both brands are young compared to the big players in the world of luxury timepieces. And they both seek to create meaningful pieces that capture important events in history. Timepieces that, quite literally, allow their wearer to own a part of history.

Written by
Tamara Will

Tamara Will is a creative thinker who has a knack for words and an eye for detail. She enjoys crafting articles on a broad range of topics and isn't one to shy away from a challenge. Storytelling is what drives her – either through writing or visual images.