The Mastermind and the Performer 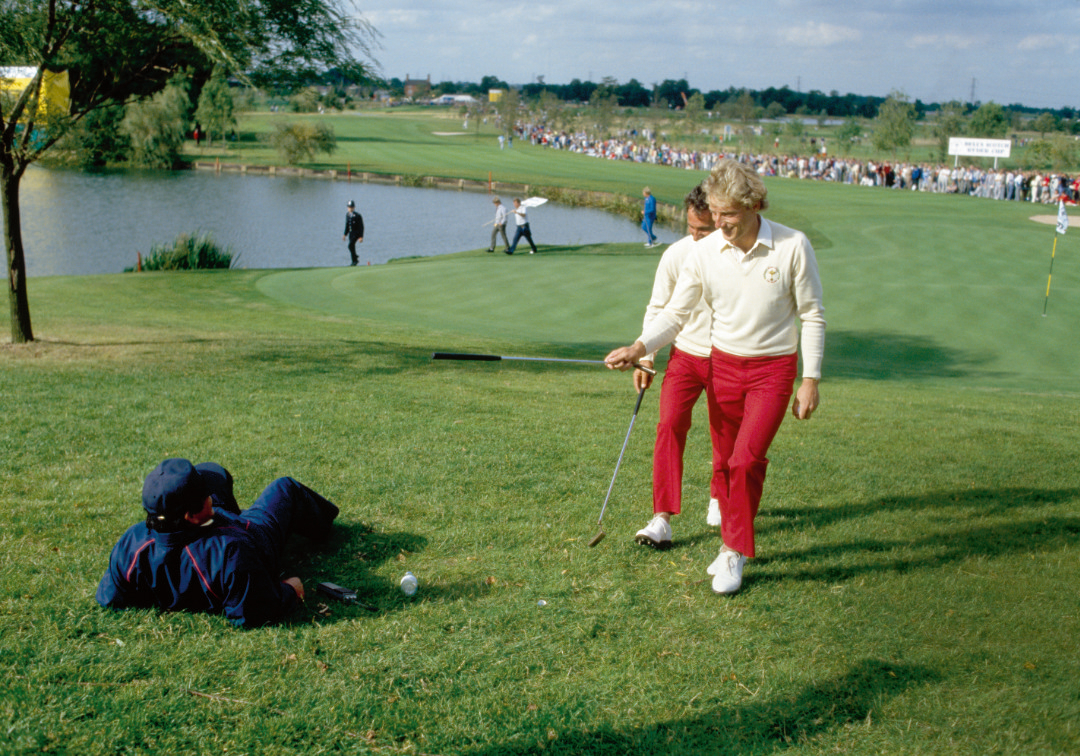 Golf’s great performances are recorded in history; the famous victories, the valiant misses, but sometimes the most memorable entertainment comes from the contrasting personalities that combine to create sporting drama.

In the Piccadilly World Match Play at Wentworth in 1972, Lee Trevino was drawn against home favourite Tony Jacklin in one of the semi-finals. The two golfers knew each other well – both major champions in their conquering prime – and just weeks before, in The Open at Muirfield, American Trevino had broken Englishman Jacklin’s heart with a holed chip from deep rough at the penultimate hole (it set up victory for Trevino and the ensuing years would show that Jacklin was never the same force again).

As they teed off on this October morning in the Match Play, Jacklin wasn’t in the mood for Trevino’s famous verbal stream of quips and clamour. He said to Trevino, “Lee, I really don’t feel like talking today, if that’s okay, so I’m probably not going to say much.” In a flash, Trevino replied: “Hey, Tone, you don’t need to talk, just listen”. There was no stopping Trevino, and Jacklin couldn’t find the answer that day either, losing at the last hole.

It was not a distraction by design by Trevino, but when he got inside the ropes, he liked to talk, and the fans loved to listen, which spurred him to talk all the more. “I feed off people,” Trevino once said. “Sometimes I think the fans follow me as much to hear me talk as to watch me play. Whatever, I’m the people’s champion and proud of it. When I get out of that car at the course, I’m on stage and I enjoy what I do.”

American writer Sam Blair, who collaborated with Trevino on his autobiography ‘SuperMex’ agrees that Trevino is “a golfer who captured the world as much with his personality as he did with his game. He comes across as fresh and quick, and he is.”

Trevino would ultimately win six major titles between 1968 and 1984, the first two of which were US Opens, at Oak Hill in 1968 – Trevino’s first professional victory – and at Merion in 1971, when he defeated Jack Nicklaus in an 18-hole play-off. Talking of quick wit, after that championship Trevino said: “I love Merion and I don’t even know her last name”.

It is a great line, but Jacklin might not have laughed. Jacklin was a fiery, uncompromising competitor – and the first English golfer to win the US Open in the post-war era, in 1970 – although he mellowed as time passed.

“Everybody on the tour knew this was just Lee’s way of dealing with the pressure. He had to talk,” Jacklin once said. “That was his release valve. No-one talked as much as Trevino and it was always just that little bit of a distraction. Did it take away something from his opponent’s resolve and concentration? Yes, it did. But what’s important is that Lee never used it that way. It wasn’t a conscious thing on his part. Lee Trevino was Lee Trevino and he couldn’t help himself. You just had to learn to deal with it.”

One of the best-known Trevino stories is the one that nearly killed him when he was struck by lightning at the 1975 Western Open at Butler National Golf Club. It was laced with irony too. Literally, the week before Trevino was hit, he played in the US Open at Medinah when the klaxon blew for a weather warning. “I’m not scared of lightning,” Trevino told the adoring gallery, “I’ve made my peace with the Lord and he promised he wouldn’t throw any darts at me.” Trevino retired that joke once the bolt of lightning bounced off a lake, shot through his back and out of his left shoulder, and dissolved the lubricant between his vertebrae on its way through. Lower back trouble would persist for the rest of Trevino’s career and we’ll never know how much more his golfing dominance could have endured during the late 1970s and early 1980s had lightning not struck.

“Lee Trevino can make it all seem so easy,” starts Bernhard Langer, who would follow Trevino to the top of the world game half a generation later, with their careers overlapping midway. “Lee is a natural comedian, an intuitively funny man. Yet, even in his case, he needs time on his own, space away from the crowds who demand his attention. “I am not a joker, but I enjoy hearing an amusing tale told by someone who has such a gift. Life must not be taken seriously all the time.”

Trevino and Langer project contrasting personalities, yet they have both carved out historically successful careers, both in their own inimitable way, and yet they do have something in common. Both golfers emerged from poor backgrounds, both found golf by putting in the long, hard miles caddying for money as kids before they picked up a club – both caddying from the age of eight – and both entered the professional game as outsiders. Trevino was the first American of Mexican heritage to become established on the PGA Tour in the United States before Langer became the first German golfer to win on the European Tour and play in the Ryder Cup. Ultimately, he would become the first German golfer to win a major when winning the Masters in 1985.

Unlike many of today’s young professionals, who make the carefully nurtured progression from college golf to the pro circuits, golfers like Trevino and Langer, Jacklin and Seve Ballesteros, each had to forge their own paths through some difficult terrain.

On winning his first pro title at the 1968 US Open, Trevino joked: “There were thousands around the green and five policemen escorted me through the crowd to the clubhouse. I hadn’t had so much attention from the cops since I backfired my 1949 Ford on North Central Expressway when I was 15.”

For Langer, in 1972 and at the age of 14, looking to leave school to pursue a career in golf, he had an appointment with the local institute for job placement in Anhausen. When Langer told the official he wanted to be a golf professional, he replied that he had never heard of such a job. The official went into a different room to look for information on golf pros, before returning to tell Langer, “There is no such thing… find something else to do.”

On the outside, these golfers might exude contrasting personalities, yet an upbringing of occasional hard knocks left them with an iron core. Just as Trevino was never intimidated by the peerless Jack Nicklaus, so Langer has never shied from Ballesteros. Many tour golfers could not honestly claim the same.

Indeed, Nicklaus would later concede: “Of all my contemporaries, Trevino was the hardest to beat.” “That comment is the feather in my hat,” says Trevino. “I was so proud when I heard Jack said that. I get goosebumps telling you this now. I am proud of a lot of things but I have never received a greater compliment. It means even more coming from the greatest golfer of all time.”

Spontaneous Trevino talks his way around the course while methodical Langer is not silent, but every word, every move, every swing, is the result of fulsome consideration. Not only did this approach earn Langer two Masters titles, the second coming in 1993, but it made him golf’s first official World Number One (before Ballesteros, who was ranked second in the inaugural ranking of April 6, 1986).

Last November, on his favourite golf course at Augusta National, Langer’s relentless work ethic saw him set a new mark as the oldest golfer ever to make the cut at the Masters, at the age of 63 and two months. The following day, in the third round, he was grouped with Rory McIlroy. “It’s so impressive, just the way he methodically plots his way around and gets it up and down when he needs to,” said McIlroy after their round. “It’s really cool to watch.”

When Langer rose to the top of the world game in the early 1980s, his principal rival on the European Tour was another contrasting personality, Ballesteros, the hot-headed, impulsive matador of golf. When Ballesteros famously won The Open at St Andrews in 1984, his playing partner in the final round was Langer. A few months later, when Langer won his first Green Jacket in 1985, he played in the final round with Ballesteros.

“I congratulated Seve at St Andrews and he congratulated me at Augusta,” recalls Langer. “Those were two pairings I will never forget, put it that way.” Steve and I were arch-rivals in a sense. We were quite the opposite of each other in terms of style of play and it was fascinating. When I was younger, I was intrigued by the rivalry in tennis between John McEnroe and Bjorn Borg. Borg never showed any emotion, as cool as a cucumber, whereas McEnroe was the opposite, always shouting and losing his temper. They played each other many times and they both had great success, and it was hard to tell which player was better. Those opposites in sports are fascinating for the spectators, and different people root for different players.

By studying Langer’s body language and facial expressions on the golf course, it is very hard to tell how he is playing. It was the same with another of his great European rivals, Nick Faldo, while Trevino and the late Ballesteros were much more expressive. “I think I show more emotions now than I used to,” offers Langer. “If someone knows me, they can tell right away by my facial expressions how I am feeling, or by my body language. I tried very hard to remain steady when I was younger. My sporting idol when I was young was Borg, so maybe some of my outward calm came from watching him.”

Trevino, now happily retired at the age of 81, would like to see more golfers on tour today open up their personalities. “I just wish we saw some humour in more of the young players,” he says. “Humour is pretty rare on the golf tour now. There aren’t many who will stop between holes to tell a joke anymore. So many pro golfers today have gone from high school to college to the tour. They have been totally isolated. They’ve never had to deal with the public.”

As professional golf has become more corporate, golfers speak to the media less as their time and exposure are more carefully managed by agents. More isolation from the public, less spontaneity. Yet, it is unrealistic to expect golfers today to emulate Trevino, or Ballesteros, or American golf’s great post-war hero, Arnold Palmer, who was pursued religiously at tournaments by “Arnie’s Army”. These are personalities with a magnetism that cannot be taught and cannot be forced. The important thing is to cherish these characters as they come, to retell their words and reflect on their brilliance. Failure to do that would be the real crime.