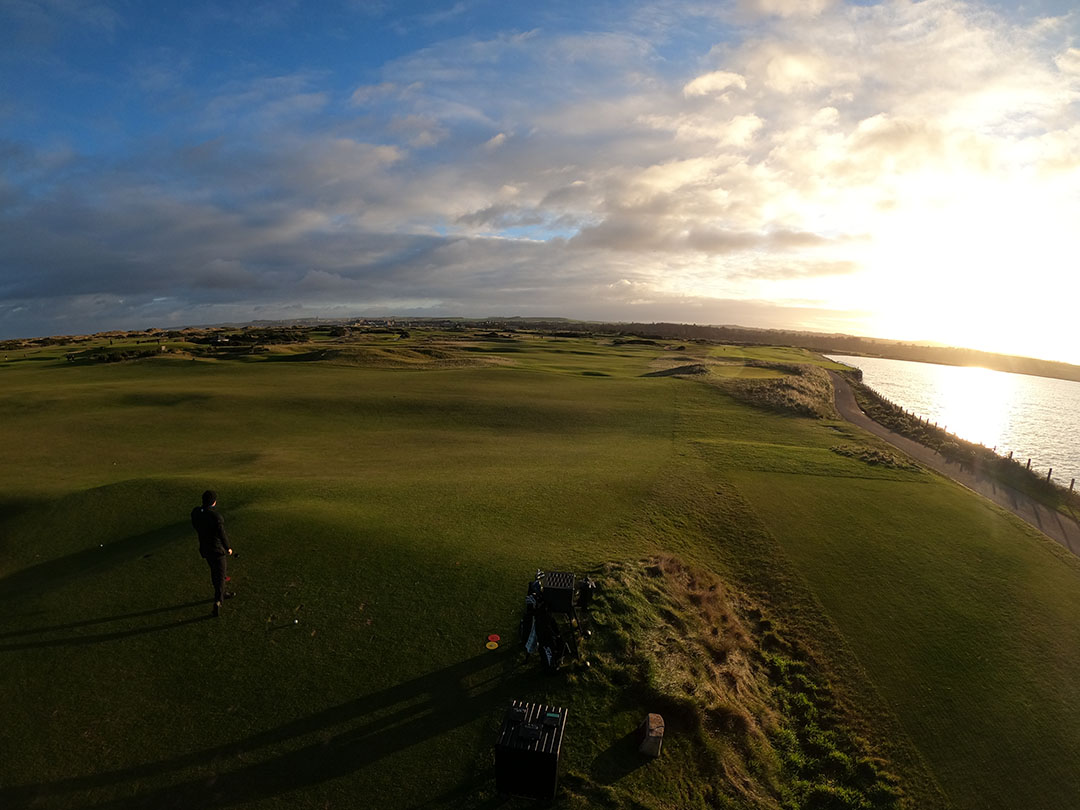 Playing the Old Course in Reverse – a historical journey that could take you back to the future.

There was a golden time, literally referred to as the Golden Age of Golf Course Architecture, in roughly the first third of the 20th century, when the vast majority of the world’s greatest courses were created. Courses like Pine Valley, National Golf Links of America, Royal Melbourne, Royal County Down, Cypress Point, Pinehurst and Winged Foot to name but a few. The architects of these greats were all disciples of the Old Course. They had all spent time specifically studying the features of the Old Course and also in most cases learning from the man who had by far the most significant input in its design, Old Tom Morris. Some of the most famous and influential course designers, names like A.W Tillinghast, CB MacDonald, Alistair Mackenzie, Harry Colt and Donald Ross, all studied The Old and exchanged ideas with Old Tom. It’s no exaggeration to say that the vast majority of golf courses in the world today will have a bloodline that on some level traces back to the two Old’s – Tom and the Old Course.

In more recent times, Old Course disciples like Doak, Hanse and Coore & Crenshaw have invigorated their own current designs with an even purer version of the Old Course. Streamsong in USA or Tara Iti in New Zealand (all featuring the above designers) have pushed the boundaries (quite literally) of maximum width and strategy through angles and ground contours, just like the Old Course. But what virtually nobody has ever sought to recreate is what St Andrews did for around
500 years, and that is to play a reversible course. Even through into the mid 20th century the Old Course in Reverse was still in regular use. How could nobody take notice and try to recreate this feature elsewhere? It essentially allows for two courses in one.

What’s it like to play the Old Course ‘backwards’. Disorientating for sure.

Much of what you know and have experienced on these hallowed grounds are suddenly redundant. It feels like you have just made a wrong turn into a one-way street. Sure, the drive from the first tee isn’t too different. The atmosphere remains as strong as ever as you try desperately to keep a lid on nerves while also trying to ignore the feeling that it’s not just locals that are watching you, but perhaps Tom Morris himself is also casting his regal eye over the swing you are about to unleash.

Next comes the moment where your golfing senses are well and truly reversed. Your first approach shot of the day, from that ever so tight St Andrews fescue, is to the Road Hole green – and it’s arguably a harder approach than on the standard route. You may well be starting your round with a triple bogie – just like I did. Rest assured, that won’t have been the highest score of the day on that hole, for the Reverse 1st hole is somewhat of a brutal opener.

Time for focus once more as we are quickly confronted with another sturdy par four. On the usual right-hand route, the 2nd hole is revered by many as one of the great two shotters in the game. Renowned course architect Tom Doak goes so far as to state that “it should serve as a model for course designers looking to counter the adverse effects of equipment technology”. He goes on to reason that the hole is “brought to life by simple things, namely the firmness of the ground and the rippling undulations of the Old Course”. The truth is, this view could apply to any hole on the Old Course and links golf in general. Unfortunately, much of those rippling undulations are, on this Reverse 2nd hole, hidden under thick rough. Reason being, when played as the usual 17th hole this area of the course is not in play and has been left to its own devices. It’s a shame as it makes the hole play somewhat awkwardly.

The Old Course in Reverse is a juxtapose of then and now. A palimpsest where today’s iteration is manicured to perfection. Peel away the high gloss on the Strokesaver and leaf through the raw manuscript that lays beneath. From a time lost, but not yet forgotten.

With the shock of the 1st hole and the slight awkwardness of the 2nd behind us, the course now literally opens up in front of us, and we begin a run, with the possible exception of the 6th, of nine excellent holes in a row. Most of these holes now feel like proper golf holes. Why? Partly because they play away from the iconic scenery, we are all used to on the holes close to the town. But equally, because they have room to breathe, a greater sense of identity and point of difference of their own. Playing the 3rd, 4th and 5th holes rumblings were growing amongst us that perhaps the Reverse could be better than the normal. We were not now judging holes by the fact that their existence meant the non existence of an iconic hole such as the Road Hole and the Reverse’s opening hole. No. We were now simply enjoying playing some bloody good golf holes – all with proper fairways, well-placed hazards and open approaches to the greens. The 6th hole was a slight anomaly and broke the hysteria that was building up. Quite literally, as with the second hole, there was almost no fairway. The tiny sliver purporting to be a fairway abruptly ended at around 190 yards out. We felt compelled, nay forced, to attack the hole from the far-right hand side again – the regular route. Being forced so far right on this left-hand route, the approach felt awkward. That was a shame as the 6th green (or the 12th on the normal course) is one of the finest in golf.

The run of fine holes continues with the 7th – many a people’s favourite on this Reverse route. This is in many ways the ‘signature’ hole of the Reverse. Anyone who has played, or is familiar with the Old Course, is aware of the normal 12th hole and the collection of blind bunkers that are dotted around the fairway. Played in Reverse, these bunkers are now visible and arguably better placed. The approach to what is usually the 11th green is also somewhat of an iconic feeling moment for the Reverse Course as you play up to what is now an infinity green with the vast Eden Estuary backdrop. Standing at this far end of the course, the furthest point from the town, you can’t help but feel, if just for a moment, that the line between our created world of human existence and the elemental world of the natural links is blurring slightly. As Nan Shepherd once remarked, “it’s a grand thing, to get leave to live”.

High of this transient moment, our attention turns to the par-three 8th hole, our first transient golf hole of the round. A fine, short hole that more than sustains this excellent run of holes. The 9th and 10th play out in a very similar fashion to their normal siblings. The Reverse 9th even plays to the same green as the 9th on the normal course, in a similar way to how the 18th will when we complete our round in nine holes time.

Next comes the second and final par 3 of the course. The 11th hole, over on the normal routes 9th tee. The slight curiosity of the two par-threes on the Reverse is that they play along an almost east-west axis, whereas their counterparts play north-south. I would argue that this adds a much needed subtle change of direction in what is one of the world’s most linear golf courses. This nuance is a definite win for the Reverse over the normal route!

Just when the course is hitting its stride again during this run of good holes comes a non-hole. The Reverse 12th is a mess. It derails the Reverse just when it needs it most. The Old Course’s normal route has, in my opinion, the best back nine in golf. And the normal 12th is a great risk-reward short par-four. Not so on the Reverse. The problem of rough ground arises once more. The best play would be a 140 yard shot off the tee followed by a 200+ yard approach over rough ground and gorse bushes. Not good. However, most of the remaining holes are all pretty good, apart from the 17th hole. Here, the problem of rough ground in the wrong place arises one last time to spoil what could be a great hole.

Overall the Reverse Course is a great experience, with an abundance of good holes. With the relatively simple act of reinstating fairway areas on the 2nd, 6th, 12th and 17th holes, the course would be fantastic.

I’d love for the St Andrews Links Trust to make playing the Reverse Course a regular occurrence, perhaps for a week twice a year. That would then warrant putting some time into making a few changes to the four holes mentioned that don’t quite work. With that in place, the Reverse would be a fantastic course and more than that, it could stand as not just an impressive historical monument but also could serve as a template for future golf course designs. Tom Doak, the course architect I mentioned earlier, has recently put the finishing touches on a reversible course at Forest Dunes in Michigan, USA. It remains to be seen how this course, known as ‘The Loop’, will be received. If the rest of his portfolio is anything to go by, I would predict The Loop will be in for some critical acclaim and may even help to push reversible courses into the mainstream. What a perfect time for St Andrews to do a little tweaking and reinstate The Original Reversible Loop.

A brief history of the Reverse Course

Ben Sargent is a PGA professional and retail manager at The Wisley. He contributes to Golf World and National Club Golfer magazine, specifically their Top 100 course ranking lists. He is passionate about all things golf, especially its history, course architecture and golf travel within the British Isles.