From Staid to Stylish 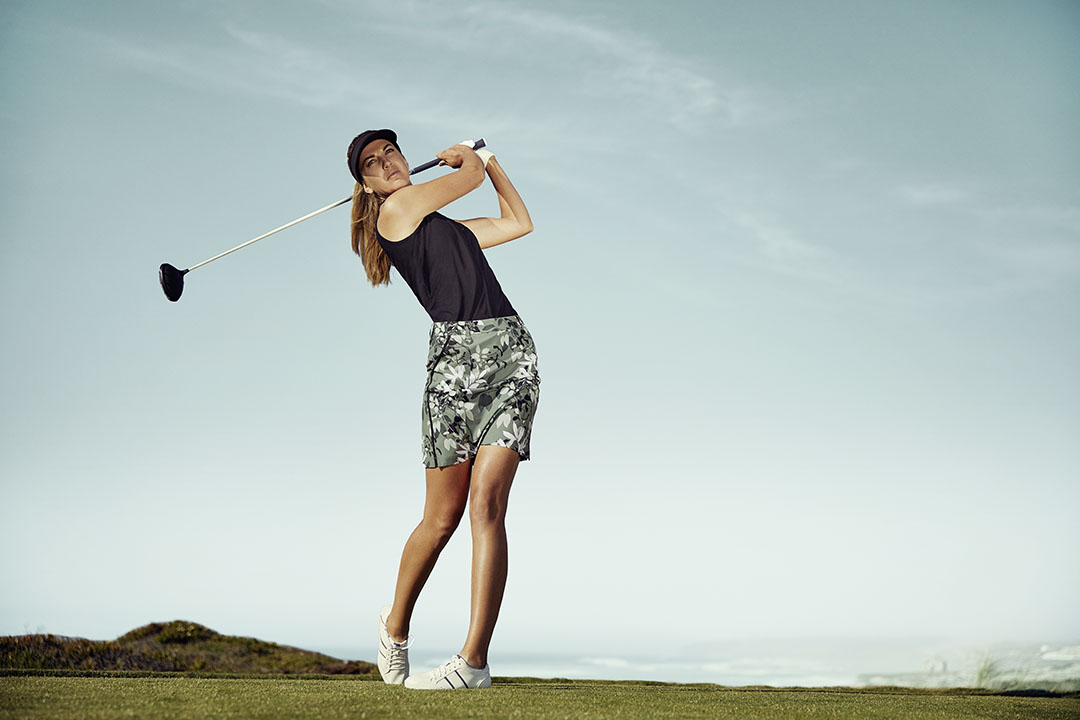 Golf fashion is now part of everyday life and its overall development over the last decade or so, which has been fast-forwarded by changes in society and lifestyle, has brought with it a whole new set of rules and dress code debates within the pro ranks and at golf clubs up and down the country.

Gone are the days when golfers had a limited choice of what to wear. A basic pair of plain cotton trousers or shorts, combined with a shapeless and scratchy polo shirt was generally the norm, even towards the end of the last century.

In the 1920s, at the same time that female golfers were taking to the fairways in long skirts, cardigans and cloche-style hats, the first argyle design was used on a jumper for the Duke of Windsor, as he wanted something to match the pattern on his socks. Fortunate or not, it was this design that became part of golf’s heritage, and was particularly popular in the 70s and 80s, especially when British golfer Sir Nick Faldo began lifting a number of major trophies wearing diamond-patterned Pringle sweaters.

During the 1990s, big hair, unflattering baggy trousers and an overload of check designs superseded the argyle pattern, although as is often the case with fashion, what goes around comes around, and Pringle made a resurgence in early 2000 when style icons Jodie Kidd, David Beckham and Robbie Williams contributed to making the pattern trendy again.

Over recent years tour players have forged ahead to give the game a much-needed element of colour and glamour, although sometimes not without having their knuckles rapped if tournament organisers felt that their choice of outfit had overstepped the mark. As an example, who can forget Ian Poulter’s flamboyant Union Jack trousers that he wore for his opening round at the 2004 British Open at Royal Troon? Rebellious perhaps, but they demonstrated how golf fashion can be fun and interesting.

Rickie Fowler always wears Puma orange on the final day of a tournament, a tradition that stems from his days at Oklahoma State University, while John Daly, the larger than life American chooses the Loudmouth brand to match his personality.

Fashion has transcended to a whole new level for professional women golfers and, with an influx of Asian players on the LPGA Tour, the fairways are definitely brighter as they express their love of colour and glitz through their outfits. Similarly, leading players like Michelle Wie, Lexi Thompson, Anna Nordqvist and Sandra Gal, to name just a few, look more like supermodels than sportswomen, wearing short skirts and figure-hugging Lycra tops.

In fact, in the summer of 2017 the LPGA thought that some players had gone too far and were showing a little too much flesh for their liking, so the organisation issued a new dress code policy:

Note: Anyone flouting these rules will be liable to a $1,000 fine.

Of course there are limits and it’s important to understand and apply golf’s traditions, rules and etiquette, but in a sensible manner.

Perhaps it’s the likes of professional golfer and social media sensation, Paige Spirinac, who is known for her provocative outfits and how she looks, rather than how she plays, that had some influence on the new rules, by way of trying to curb sexualisation of women’s golf.

Regardless, Tour players are professional and highly-skilled athletes and surely they should be allowed to dress as such in the latest modern-day golf fashion if that’s what they feel comfortable wearing.

Indeed, women’s golf is not the only sport to land in hot water with regard to dress code dos and don’ts. At last year’s French Open, tennis sensation Serena Williams made her return to Grand Slam tournaments following the birth of her daughter wearing a skin-tight black catsuit. The 23-time Grand Slam winner dedicated the outfit to new mothers, explaining that it made her feel like a “queen from Wakanda” in reference to the Black Panther movie.

French Tennis Federation president Bernard Giudicelli announced a ban of the catsuit at future events, telling Tennis magazine: “It will no longer be accepted. I believe we have sometimes gone too far. You have to respect the game and the place.”

As far as women and girls’ golf is concerned in the UK and in the US, there is a continued focus to attract more female players to the game, particularly millennials and, if anything, it’s the development of golf fashion over recent years that has helped to drag the sport into the 21st century and quash the historic perceptions of golf being a fuddy-duddy game.

The governing bodies mean well, but implementing stricter dress codes at professional level unfortunately gives good reason to many golf clubs to follow a lead and stick with some of their stringent and outdated dress code policies.

The professional/amateur dress code divide is already confusing enough as there is a stark contrast between what is acceptable to wear on tour compared with what you can wear at traditional UK golf clubs. That said, there is similarity between both sets of players in that the game does give people the freedom to wear clothes in colours that they might otherwise leave hanging in the wardrobe, particularly men, who seem suddenly to get a penchant for pastel- coloured trousers.

Professional players are role models. Youngsters and adults alike want to emulate their heroes, but often this isn’t achievable due to strict rules like ‘collar required’.

It was back in 2003 when club committee members became very hot under the collar when Tiger Woods wore a Nike short-sleeve mock turtleneck at the Buick Invitational in California. It’s a style that has since become popular, although not without backlash.

The collar issue remains and affects women too, plus for those fortunate enough to have a gorgeous Michelle Wie-like figure that complements a short skirt or pair of shorts, they also face disappointment when a club stipulates that the length of such an item must be a limited number of inches above the knee.

Men are sometimes turned away from golf clubs for not wearing long socks with knee-length shorts, and only last summer, a gentleman was unable to tee up at Letchworth Golf Club in Hertfordshire because of the colour of his socks. The club demanded that he purchase white socks from the club’s pro shop in order to be allowed on the course.

As for juniors, it’s difficult to retain them in the sport if they are subjected to too many dress code rules and regulations, especially when there are so many other sports competing for their attention. Ladies European Tour player Meghan MacLaren is a good example of how golf clubs can help themselves by acting sensibly when it comes to implementing dress code.

As a seven-year-old Meghan learned to play at Wexham Park, a 27-hole facility near Slough, and she was allowed to play on the club’s 9-hole course wearing her beloved Newcastle United football strip. Meghan’s father David is completely and utterly convinced that the fact that she is a professional golfer today is because Wexham understood the difference between standards and stuffiness, between enjoyment and enforcement, and between rules and guidelines.

Of course, at the heart of golf fashion are the forward-thinking manufacturers that test dress code boundaries. They follow the latest high street trends and produce what they believe golfers really want to wear on and off the golf course as Mikhel Ruia, Managing Director of Glenmuir & Sunderland of Scotland explains.

“Interestingly we are finding that the female golf clothing buyers have become increasingly savvy and price conscious but are willing to spend on products which are well made, long lasting and can be worn in a lifestyle environment rather than strictly just on the golf course. As well as golf, a number of our padded down products, performance mid-layers and luxury knitwear are being used for horse riding and walking due to their fashionable but functional properties. This trend has been seen for many years with the rise in ‘athleisure’ and we have seen the same in golf.”

There’s a natural crossover between golf and other leisure activities including tennis, cycling and fitness, and most companies now recognise this by strongly promoting their brand and collections through a series of pictures in a lifestyle environment.

European companies like Sweden’s Daily Sports, Abacus and Röhnisch, along with Germany’s Golfino and Italy’s Chervo, have long been championing the female market. Unisex polo shirts and sweaters really are a thing of the past, and women can now actually swing a club and look good at the same time in a variety of fashionable colours with flattering silhouettes in high quality performance fabric.

Colmar, an Italian company renowned for its ski and leisurewear, entered the golf market in 2010 so is a relative newcomer to the sport, but Colmar has already confidently and successfully targeted the golf/lifestyle market, and President Mario Colombo believes the company truly understands what clothing appeals to modern-day golfers.

“We like to develop collections for wear on and off the golf course that work for current lifestyles. Style has never been so at home and key, with loose lines, bright colours and increasingly dynamic movement.”

“We continue to conduct research and listen to athletes so that we can create clothing that is as high performance as possible.”

Without doubt there has been a dramatic transition from staid to stylish, but it’s yet to be seen whether everyone will embrace a more modern and relaxed dress code in the future.

What will we be wearing in five years’ time? As previously mentioned, what goes around comes around, but I do hope big hair, baggy trousers and check don’t make a comeback!

Alison Root is the editor of Women & Golf, a bi-monthly magazine and website that provides female golfers with the latest news and features, instruction, fashion, equipment, travel and lifestyle.