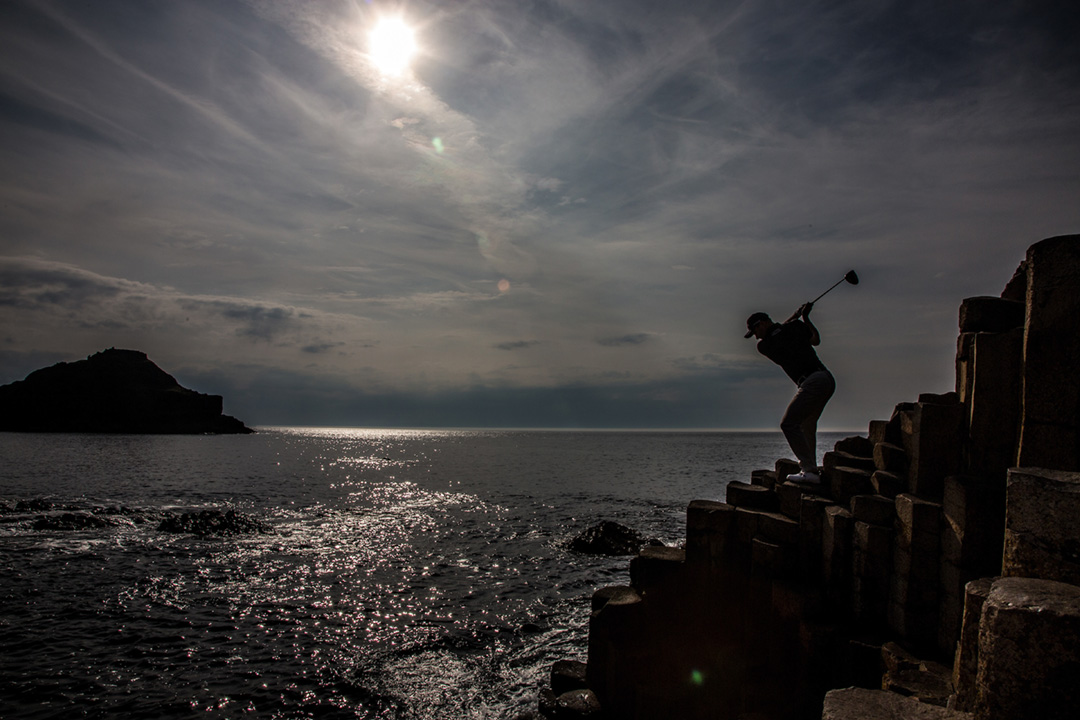 There was a time when the professional golf circuit really was a tour. In the 1970s, before the likes of Severiano Ballesteros, Bernhard Langer, Nick Faldo, Sandy Lyle and Ian Woosnam transformed the fortunes of European golf, those same players would sometimes travel the continent less like world-class sportsmen and more like gap year students. Camper-vans were common, road trips the norm and the notion that their successors would one day stay at five-star hotels in the desert would have seemed completely unbelievable.

Oliver Wilson, winner of the 2014 Alfred Dunhill Links Championship and a European Ryder Cup team member in 2008, has been a fortunate beneficiary of the influence of those superstars but also experienced echoes of the past in his 17 years on tour. “Oh yeah, I made my way back from the Irish Open in the back of a transit van once,” he laughs. “Not very glamorous, but it was an adventure!”

It’s simple, if somewhat complacent, to conclude that the modern golfer has it easy, not just in contrast to the past, but also with the man-in-the-street for whom a lifestyle of top-class hotels and airport lounges sounds more like a blessing than a burden. In reality, the ability to withstand the rigours of travel can make the difference between a successful career and an unfulfilled one.

“Travelling is the worst aspect of the job and reducing the stress is so important,” explains Wilson. “The simple details of travel are just so wearing: getting to the airport, checking in, queueing, passport control, security, noise, crowds, more queueing, more waiting. If you alleviate as much of it as possible, the mental value is huge because we’re in a performance sport and marginal gains matter come Thursday morning on the first tee.”

The various balancing acts forced upon a touring golfer begin with the schedule and arranging flights. “Nowadays I book a lot of my flights myself and that’s definitely the case within Europe,” he says. “As soon as I head further afield, unless it’s a direct flight maybe, I’ll go through European Tour Travel. They’ve been doing it for years so have all the expertise and know my preferences.”

“When we’re in Europe you want to be away as soon as possible on a Sunday. It can be a mad rush, but it’s worth it because a day with the family is so good for you. I’m spoilt living between Gatwick and Heathrow because it gives me so many flight options.”

The nature of tournament golf further complicates matters, throwing missed cuts and unknown Sunday afternoon tee times into an already complex equation. “Changing dates and times of flights has become so expensive and inflexible,” Wilson laughs ruefully. “You end up gauging a lot of factors: How far is the course from the airport? What’s the predicted finish time? Am I likely to play well? Is it a city that is expensive to fly in and out of? Sometimes you book a return, sometimes just the outbound sector. Some guys will even book multiple return options and cancel the ones they don’t need. Others, especially if they don’t live near a major hub, will just fly onto the next tournament because it’s a lot cheaper.”

Inevitably some players find such minutiae a distraction. “They just don’t want the hassle and leave it to their management,” Wilson explains. “It depends on how particular you are. And I am quite particular. I’ve been doing it long enough to know the score pretty well.”

Like most pros, Wilson tends to fly economy around Europe and business when travelling long haul. A worthwhile expense? “Oh, massively so. On a flight coming home, it’s not a big deal, but you need to arrive in the best possible shape and to sit for 12 hours is terrible for the body. Some players can sleep in the economy class but I can’t and even a six-hour sleep on a flat bed has you ahead of the game. Business is a luxury, and it’s getting more and more expensive, but it’s definitely worth it.”

“There’s a bit of ego in there too. My first European Tour event was the Hong Kong Open. When I boarded the plane, I watched other players and a couple of caddies go left while I went right. It sucked! I thought ‘I’m not having that.’ It made me want to play well enough to be able to afford it!”

Airport niggles continue on arrival and no tour golfer is without tales of luggage woe. “I’ve had bags turn up with a broken driver, holes in my bag and even clubs hanging out,” he sighs. “It’s more stress so you take that into consideration because you can get very cheap flights out to the far east, but you’ve got to weigh up the quality of the aircraft, the service and the chances of losing luggage. It’s often worth paying more and also avoiding airports like Charles de Gaulle in Paris helps!”

Travel know-how also proves crucial with accommodation. “Pretty much every week, there will be two tournament hotels with a special rate that might not actually be very good. But the transfers to the course will go from there, so it’s another balancing act. It helps to have a feel for the best options after a couple of visits. Often we might stay at a cheaper or favourite hotel across the road. Dubai is a good example. We’ve been there so often and the hotels are probably the best in the World. I like staying on Walk at JBR. It’s got a great atmosphere and I’ve even found a great laundry that’s been doing my clothes for years – £20 instead of £200 in the hotel!”

Increasingly players take greater care of their health while on the road, helped by the European Tour Performance Institute which utilises sports science to manage conditioning. Its advice goes beyond physiotherapy and fitness, advocating the use of compression socks and nasal sprays to avoid flight-related health problems and also promoting healthy fuelling.

“The tour has done an excellent job at making on-site food more nutritious. We go to many different countries, but there’s a blueprint of basics on offer that we can rely on. Airport and aeroplane food is poor, so I often travel with snacks to navigate that time. A typical day starts with a one-hour warm-up, followed by five hours on the course, a couple of hours practising and a gym session. You need three or four thousand calories for that. It’s hard to achieve with good food, but worth the effort.”

Like many who have made it to the top of the game, Wilson began his career on the second-tier Challenge Tour and the circuit is well named. “It’s harder than the main tour,” he says. “The events are never in major cities, so you’re on connecting flights to odd airports with awkward times, then long drives to the middle of nowhere, with no gyms, often poor food and doing your laundry in the bath. You’re thrown right in there and not earning enough to cover costs unless you finish top ten. The flip side is that everyone travels together. It’s good craic, it breeds friendships and toughens you up.”

Not that the European Tour is without surprises. “Me and Oli Fisher once took a taxi in Thailand which got lost and just dumped us!” he laughs. “We had to get a tuk-tuk back to the hotel in our golf gear! And when I first went to China, the courtesy car went the wrong way down a four-lane highway. We were terrified, but those are one-offs. Mostly the administration and organisation are seamless.”

Ultimately Wilson has come to appreciate the benefits of good habits and his successes in China (three times a runner-up there) typify that. “I quickly understood that arriving a day early, on Sunday morning, was good for me. To combat jetlag, you need to get your body moving and the blood pumping. So I’ll go for a swim, workout, massage or physio, food and a good night’s sleep. It sets me up for being early for everything – waking, eating, playing, sleeping – but it’s a good rhythm and the energy levels are good. Getting a travel routine that works for you, one that prepares you as quickly as possible, is not just important on the road – it’s invaluable.”

This earnt him a scholarship at Augusta State University where he went on to become the No.1 ranked collegiate player in the US, turning professional in 2003 after victory with Great Britain and Ireland at the Walker Cup.

Having ranked 15th on the Challenge Tour in his first year as a pro, Oli joined the European Tour in 2005, posting three top-ten finishes during his rookie season. A runner-up on three occasions over the next two years, he enjoyed victory at the Seve Trophy for Great Britain and Ireland in 2007.

Four more runner-up spots, including the BMW PGA Championship, and an 11th place finish on the European Tour in 2008 earned Oli a place on the European Ryder Cup team, the first person in history to qualify for either team without a professional victory. He came back from four down with partner Henrik Stenson to beat Anthony Kim and Phil Mickelson.

In 2009, Oli ranked 33rd in the World. Another victory for Great Britain and Ireland at the Seve Trophy and six top-ten finishes, including two in WGC events, as well as two more runner-up spots at the Alfred Dunhill Links Championship and the HSBC Champions. Oliver finished the season ranked 7th on the European Tour.

In 2014, Oliver celebrated an emotional maiden Tour victory at the Alfred Dunhill Links Championship at the ‘Home of Golf’, St Andrews, Scotland.