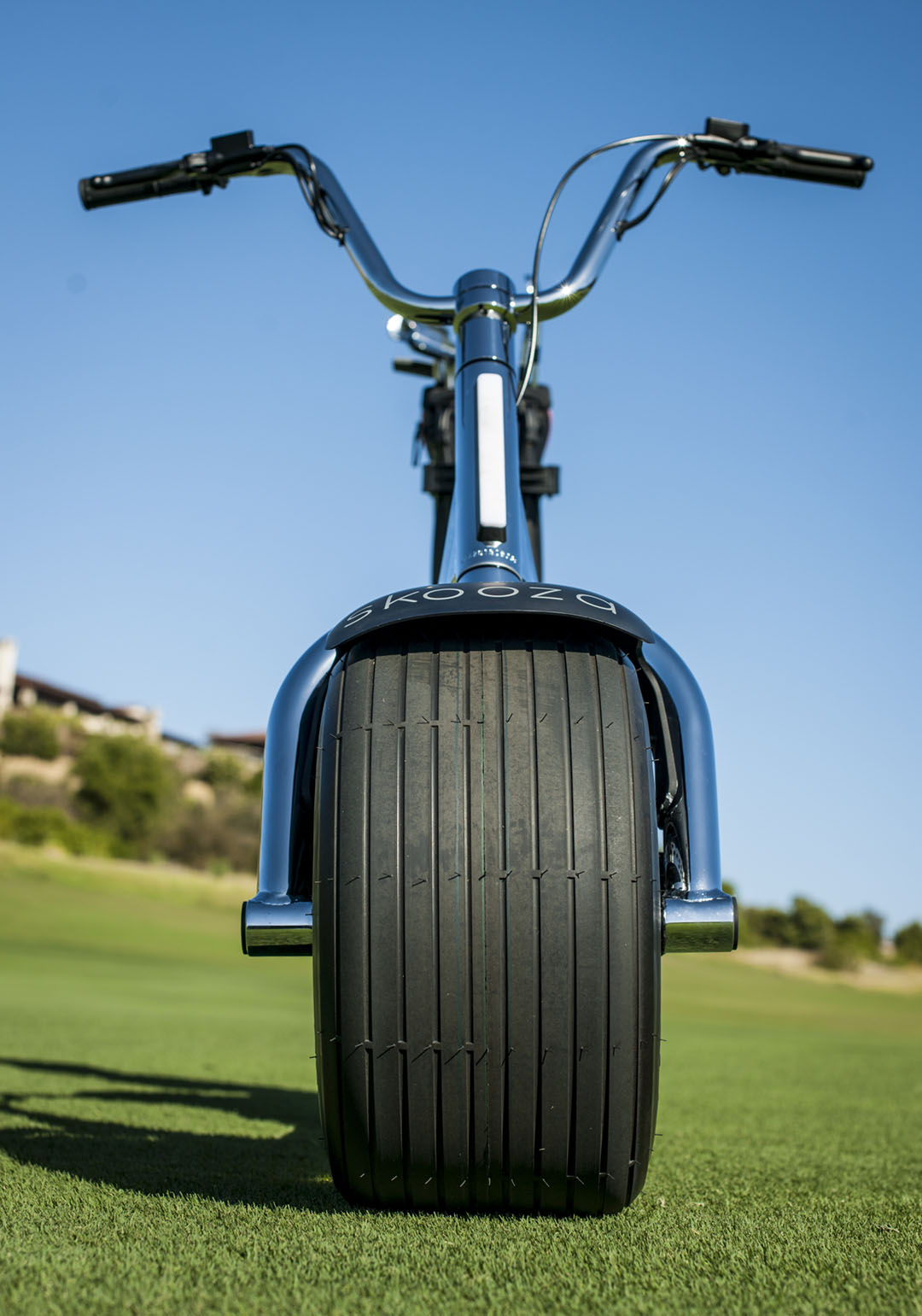 More than a century after John D. Rockefeller first cycled between golf shots, Robin Barwick writes that the industry is beginning to think the American industrialist may have been onto something.

John D. Rockefeller was not a man tied down by the constraints of convention. This oil magnate – thought to have been the richest man in America – was an innovator, a problem solver. When he caught the golf bug in his early sixties (Rockefeller was 60 years old at the turn of the 20th century), he found a novel way of squeezing as many holes into a limited timeframe as he could, by cycling on the golf course from shot to shot.

But did he have two bikes, one for him and one for his caddie, or did his poor caddie have to carry Rockefeller’s bag while running to keep up? We don’t know – apologies – although we do know that Rockefeller’s bag was not an easy ‘carry’. A golfer who struggled to shoot under 100 over 18 holes, it has been said that Rockefeller fined his caddies when he lost a ball, although ultimately he would tip generously before peddling off for lunch.

Rockefeller would have roundly approved of the 21st century’s purpose-built, American-made Golf Bike. Much of the Golf Bike appeal derives from its relative simplicity: it is a six-gear peddle bike with standard rim brakes operated by handlebar levers. The real ingenuity of the Golf Bike is its three-bag system installed on the back. Instead of carrying a standard golf bag – which could cause havoc with balance while riding – the Golf Bike comes with a pair of narrow side-mounted bags that sit either side of the rear wheel. A set of clubs is split between the two bags.

“The concept of the Golf Bike is based on three elements: fun, fitness and speed of play,” explains the Golf Bike’s Shawn Cury, based in Tallahassee, Florida. “The Golf Bike has allowed the individual to play faster. Many of our customers use it early in the morning or later in the afternoon when the courses are less crowded. They can play 18 holes in three hours with no problem.”

The Golf Bike was launched five years ago and is available in “Golf Bike Green” only – which is a bit like Kermit the Frog green. It remains in its infancy in terms of distribution, while the company is now working on an electric model to give golfers some added power on hilly golf courses. The Golf Bike is among the leading exponents of a new trend for single-rider machines in golf. This is not to suggest that the days of the traditional golf buggy are numbered, but after a year in which socially-distanced golf enjoyed a boom in the UK and across the world – and during which the sharing of buggies was widely prohibited – the concept of transit alternatives on the golf course has gained momentum.

There is even a two-wheeled golf-specific Segway model – with two parallel wheels and a platform in between on which the rider stands – although our attempts to find out more were fruitless and honestly, it is difficult to imagine a Segway reaching the golf mass market. Segways seem perfectly suited for security staff in massive shopping malls – that kind of thing – and perhaps the Segway is a practical companion for golf on the famously flat golf courses of Florida, or out in the Great Plains of Nebraska, but in the wooded Surrey Hills or out among the dipping dunes of an old links course, the Segway is unlikely to take hold.

Rick Reimers, CEO and Inventor or the Finn Cycle, says: “It is time to rethink golf. The young people don’t have 4.5 hours to spend on the course.”

Taking the concept of golf course bikes up a gear is the lithium-powered golfer’s scooter, the Finn Cycle, which is the invention of Rick Reimers (CEO of equipment and apparel brand Sun Mountain) in Missoula, Montana.

Before your imagination conjures visions of your beloved, favourite golf course being reduced to an oversized dirt-bike track – with the delicate scent of summer roses replaced by the gritty whiff of two-stroke – be reassured that the electric Finn Cycle tops out at a sedate 15 mph. This is not a machine built for speed, but more for a serene journey around the course, and the all-important biker’s balance is aided by a clever location of the golf bag along the central shaft of the bike frame.

“The Finn Cycle is tremendous,” starts Nigel Freemantle of UK distributor Brand Fusion, who hopes to get Finn Cycle on sale in the UK this summer. “Every time we take them out on golf courses, they create such a buzz. Thanks to great torque, they will carry you pretty much up any hill, but the big thing is that riding the Finn Cycle is just so much fun. It gives new meaning to enjoying a round of golf. Every single person we have put on the Finn Cycle has come back telling us how fantastic it is and it is going to help attract more people onto the golf course.”

Probably the widest two-wheeler on the course belong to Skooza, which was launched into the American market at the beginning of 2020. After a slow start, once the pandemic resulted in socially-distanced golf, Skooza sales rocketed. A scooter that can ride on the street and on the course, a battery that powers up to 35 miles of use on a single charge, Skooza’s low centre of gravity and extra-wide stance ensure a high level of handling and user safety. It is an ideal single-rider for America’s golf-course communities, where residents traditionally drive their own buggy from their garage to the first tee, and it zips passed the Finn Cycle with a top speed of 28 mph.

“Before the pandemic, I was like the ‘soft spikes’ salesman walking into the pro shop in the nineties,” starts Skooza’s Phillip James. “That’s when the pro would look at you and say, ‘That’s a really cool idea but it’s not going to work’. Well, the golf market has flipped now – as it did with spikes – and Skooza sales have increased by more than 300 percent, month on month.

“Skooza is to golf scooters what Tesla is to electric cars. We are positioned at the top of a new category that is more active than playing golf in a cart.”

Shifting up from two wheels to four, the GolfBoard is another eye-catching single-rider and a kind of hybrid between a skateboard and an electric trolley (yet safe to ride without elbow and knee pads). And it might look like it’s built for the youth of today, but with wide, high-traction wheels, four-wheel drive, a broad base on which to stand and a stately top speed of 13 mph, the GolfBoard is geared for safety at any age.

The fun in riding one looks undeniable. The handlebar on the front is only there to maintain stability and control the speed, but not the direction. To turn left or right, the rider needs to lean one way or the other, with a motion similar to that of skateboarding and snowboarding.

“When we let people try out the GolfBoard they don’t want to hand it back,” starts Malcolm Barry, who distributes GolfBoard from his base in Newcastle-upon-Tyne. “It’s like a puppy. Last year, I was up at Hexham Golf Club and it was raining, but this 91-year-old lady enjoyed testing the GolfBoard so much, we couldn’t get her off it. ‘That was the best fun I have had in years,” she said. “It brings out the kid in you.”

The GolfBoard is made by the Solboard company in Bend, Oregon (West coast, naturally) and while the GolfBoard is becoming more frequently spotted in the United States and is being rented out to golfers at more than 300 golf courses worldwide, it remains a very rare breed on this side of the Atlantic. There are less than 50 GolfBoards in the UK at the time of writing, but Barry is waiting patiently for more open golf courses and an economic bounce-back in 2021.

“I am very optimistic for 2021,” he says. “Renting GolfBoards to golfers can be a nice revenue stream for clubs, they take up less storage space than buggies and they don’t damage golf course turf like buggies either.”

It is a frequent claim from single-rider sellers that their product causes less turf damage than a golf buggy, yet the scientific evidence of this is scarce. These single riders may be lighter than a buggy, yet buggies spread their load via four wide tires, and it might jar with golf course managers and superintendents to accept single two-wheel riders after they spent much of the summer lockdown chasing away maverick mountain bikers.

Safe, easy to learn, and environmentally friendly, anyone can ‘Surf the Earth’ on the GolfBoard like a pro in just a few minutes.

So, while 2020 was a breakthrough year for the single rider in the United States, it will take longer for the trend to take hold in the more traditional lands of the UK.

“This is a long-term, five or 10-year progression to seeing clubs with their own fleets of single-rider vehicles,” estimates Finn Cycle’s Freemantle. “Golfers and clubs will slowly get used to the idea and gradually appreciate the benefits.”

A century on from his cycled rounds of golf at home in New Jersey, it is a pity that Rockefeller cannot see how his idea is taking hold in America. “I told you so,” he’d say.