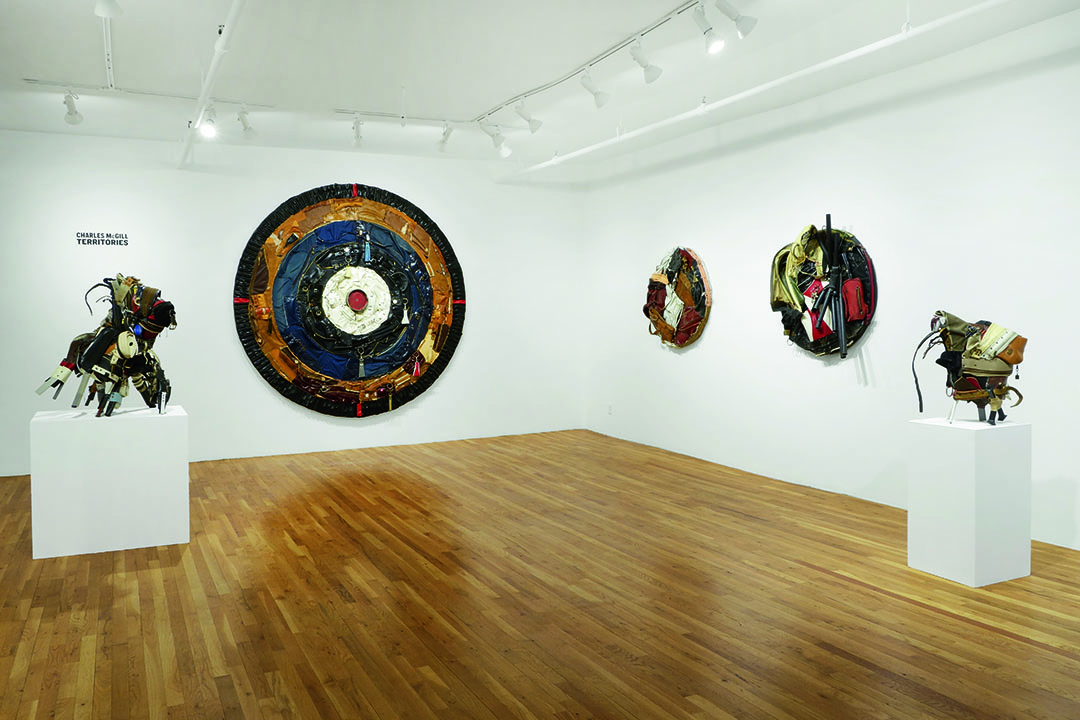 Inspiring, provocative, challenging. Charles McGill (1964 – 2017) was an outspoken artist who was trained in classical painting and later turned to sculptural artwork. To McGill, the objects he created always had to be “visually engaging first and socially relevant second.” While the inspirations behind his pieces were often serious, shocking or saddening, the creations themselves are not. His wall sculptures are always intriguing arrangements of texture and colour. It is only after moments of serious contemplation that one begins to understand the subject matter behind each piece.

Golf bags are probably not the first material anyone would think of with regard to an artist’s resources. Oil paint, marble, pencils, clay. But bags meant to carry golf clubs? And yet they are exactly what McGill used to create most of his work. A strange choice at first glance. And maybe even at second. Golf has been a fascination of Charles for most of his life. In fact, he played golf but for an African-American in the 80s, golf was not quite as inclusive as it is today. So for Charles the golf bag became a symbol for social inequality.

He loved the game, but at the same time it represented a lot of what was wrong with society at the time. This frustration and anger with social inequality was perfectly represented by the golf bag because it was such a demanding material to work with. It could be painful, difficult and very physical work. You could bend it one way and something else is undone. Golf bags are designed to last – not to be torn apart. His compositions made of parts of golf bags required a tremendous amount of brute strength, “a lot of ripping, cutting, tearing, sawing, pounding.”

The process
McGill never had a concept in mind before he started a new journey of creation. The process, as he described it, took place on a “subconscious level” – one that required him to let his art-instinct take over. A part of his very core that was “primal and necessary, visceral and vital.” However, the emotions he felt through the process were of a very conscious nature: raw, unfiltered feelings. Mostly rage, anger and frustration, mainly caused by the incredibly difficult to handle material. Every single one of his artworks was a fight. A fight against the golf bags that refused to bend to his will – but also a fight against the symbolic meaning they represented.

Angry Atlantic (Sandy) (2012)
Usually, McGill was not one to comment directly on current affairs. To him it was important that his work was “contextually relevant” at any point – he never wanted to “report on events like some artists.” Angry Atlantic (Sandy) is an exception. It is a visualisation of the deadly hurricane that struck the Caribbean and the east coast of the United States. The composition of torn-apart golf bags resembles a dark, stormy ocean. There is a prominent shape in the middle that could be interpreted as a shark-like creature, the centre of the hurricane, or a hooded figure. It is an image of the destructive forces of the natural disaster, as well as a comment on the social issues that arose after it.

Goat, Bull, Rooster, Horse (2014)
One of McGill’s major inspirations was no less a person than Picasso himself. He was fascinated by the master’s ability to merge the likeness of both animals and people with “such virtuosity that it seemed magical.” His sculpture Goat, Bull, Rooster, Horse is a homage to the famous painter. Made of the material typical for McGill, the sculpture could be any of the animals mentioned in the title. They blend seamlessly, revealing different creatures depending on the angle from which the piece is viewed. It is proof of McGill’s ability to make use of his classical training in order to create something new and surprising.

Target 51 (2015)
In retrospective, one of his most impactful – and personal – pieces of work is the tondo Target 51. The circular composition resembles exactly what the title suggests. McGill created the piece in remembrance of his father who died when he was just 51 years old. Ever since the traumatising event, McGill had the haunting feeling that he would not be able to make it to the same age; that he would lose his life even earlier than his father did. Fifty-one, therefore, became his ‘target’ age. When McGill had reached it, he created this piece to celebrate and pay tribute to his father. Sadly, only two years later, the artist died at the age of 53. Cancer had shortened his life significantly – almost turning Target 51 into a kind of tragic prophecy.

The Legacy
Charles McGill was a passionate professor who hoped to inspire in his students what his teachers once inspired in him: the urge to create meaningful art. This spirit is going to live on through the Charles McGill Scholarship that was created to help less fortunate students of the Borough of Manhattan Community College with their education. Charles, who was a professor there himself, will thereby continue to help aspiring artists find their way. His artwork and legacy will continue to encourage what was most important to him: change.

Charles exhibited in numerous galleries and museums, including the Wadsworth Atheneum Museum of Art, Lehman College Art Gallery, The Baltimore Museum of Art, the Norton Museum of Art and the Virginia Museum of Fine Art. In 2016, the Boca Raton Museum of Art staged his first solo museum exhibition, Front Line, Back Nine, curated by Kathleen Goncharov.

He contributed 30 pencil drawings to the book called The Six-Spoke Approach to Better Golf, by PGA golf teaching professional Tom Patri and shares credit on the project with such esteemed names as PGA Tour professional Fred Couples and NBC sports commentator Jimmy Roberts. In 2005 the owner of The Bridge Country Club in Bridgehampton, NY, commissioned one of Mr McGill’s most controversial pieces. Arthur Negro – Head of The Former Black Militant Golf and Country Club, a life-sized likeness of the artist, is displayed for members and visitors alike in The Bridge Pro Shop.

His performances, sculptures and installations have met with critical praise from Art in America, The International Review of African American Art, The New York Times.

Written by
Tamara Will

Tamara Will is a creative thinker who has a knack for words and an eye for detail. She enjoys crafting articles on a broad range of topics and isn't one to shy away from a challenge. Storytelling is what drives her – either through writing or visual images.