Caroline Mohr is facing the unknown 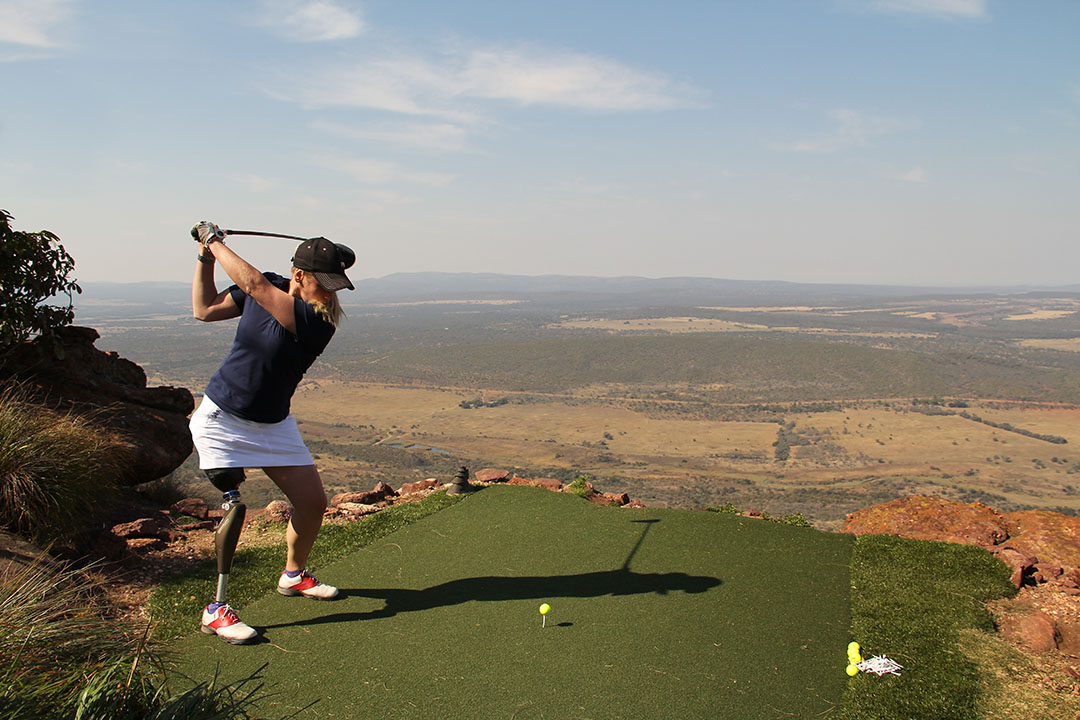 Caroline Mohr may fit the stereotypes of a typical Swede – blonde and blue-eyed with an outgoing personality. She is also an extraordinary talented golfer. But it is her optimism and mental resilience that are truly remarkable.

The headache when telling the story of Caroline Mohr is knowing where to start. Is it with the first near-death experience or the second? With the remarkable weekend she spent in London ahead of having her leg amputated or with her astonishing response to waking up with the loss? The time she started swinging a golf club, just days after the operation, or the moment, a few months later, when she birdied her first hole back on the course? Perhaps it’s best to keep it simple and start at the beginning.

In February 2011 Mohr was 22 years old and caddying for her sister Louise, then a rookie on the Ladies European Tour, at the New Zealand Open. Her aims for that year were simple: she would continue to spend a few weeks on the bag, but the real work would take place when she was swinging the clubs herself because she hoped to join Louise on Tour in 2012.

Ahead of their flight home from Christchurch, the two girls made a straightforward, but unwitting lunch choice that saved their lives because the restaurant they selected withstood the devastating earthquake, which hit the city during their meal. The buildings around it, however, didn’t.

“The streets were bobbing and weaving like the sea,” Caroline remembers. “Sometimes they even cracked beneath us, opening wide like huge chasms. People were running, screaming and crying. Debris from collapsed and lurching buildings was falling to earth with ear-splitting crashes.”

“We were led to an open area, away from buildings. There was this great mass of people stood in complete silence, staring at the city, which was a totally devastated landscape.”

The aftermath of the earthquake was no less frightening – a 72-hour nightmare of cowering in their hire car, encountering terrifying aftershocks and being involved in a panicked evacuation of the airport before finally escaping back home to Sweden. The earthquake killed 185 people and over 2,000 were injured. “We were in shock,” Mohr says. “But we knew we had been so lucky.”

The relief did not last long. In March she made a precautionary visit to a doctor about a long-term knee problem and in April he called her back. Everything seemed fine until a nurse entered the room with a glass of water and a handkerchief. “I was immediately alerted to danger,” says Mohr. “Then the doctor said ‘Chondrosarcoma’, the word which shattered my world.”

She was informed that amputation of her right leg was not just a possibility, but the only course of action. “I felt the blood in my veins sting and burn as my anger spread,” she says, but the rage faded with time and ahead of the operation Mohr undertook a weekend break in London with one startling detail. “I decided not to buy a card for public transport,” she explains. “I wanted to walk and walk and walk – walk everywhere. I did everything on two legs one last time.”

Back home in Sweden Mohr wrote a blog to calm her thoughts ahead of, and after, the operation. She wrote: “My gut feeling was calm. I did a little meditation exercise which helped me appreciate what was in front of me. I will not delve into it deeper, but I felt such peace. I felt I could handle it, that everything will be fine. Yes, I felt it 100%. I understand that people might perceive me as ‘positive’ or suspect I am repressing bad thoughts every day and dare not be sad, but it really is not so.”

She was also not only encouraged but emboldened by the results. “The news was good,” she says. “The cancer hadn’t spread. If it had, then the amputation would have been pointless. But I had a golden chance to live on. I’d paid a price, but what an opportunity. In those first days after the operation, there was no limit to my happiness. I was so thirsty for the world.”

Within a week of surgery, she spotted a golf club in the gym during rehab. The physio was reluctant to let her swing it, but she was having none of it. In fact, she already had her eyes on a remarkable aim. “Taking that club was pure happiness, I was like the 8-year-old who first played golf again,” she says. “And I knew what I wanted to do. It was two and a half months until the national championship, and I wanted to defend the fourball title with my sister.”

After that, Mohr hit an obstacle she was not prepared for. While she had come to terms with her new life, others remained sceptical. Moreover, their downbeat take was threatening to overwhelm her.

It was my loneliest moment and then my mom came into the room to show me a magazine article about another amputee who had embraced life. It rebuilt my self-belief.”

She reiterated her determination to return to competitive action. “But I don’t think anyone believed I would make it,” she says with a laugh. “My family, coach, friends, they just thought it was a good target and I’d eventually realise it wasn’t going to happen.”

Few of them had yet to come to terms with Mohr’s unconventionally new-found strength. She never hid from the difficulties, yet neither did she forget the opportunities. “It was tough,” she admits. “The surgery and the cruel pain were a real struggle, but there were positives because I dared to see the problems, dared to feel the pain, dared to ask for help.” Her mother once told Mohr that she dearly wished it had been her leg. She replied: “Mom, you wouldn’t have coped, and I have, so it’s fine.”

Her summer was powered by a self-penned mantra (“Fear less, live more”) and just two and a half months after the operation she was ready to tee it up alongside Louise against the Hedwall sisters, Caroline and Jacqueline. At the time, the former was the number one ranked player on the Ladies European Tour and she would make her Solheim Cup debut the following month, helping her team defeat the Americans.

On this day, however, she was no match for the other Caroline whose performance was little short of outrageous. Hitting on one leg because she was yet to have a sports prosthesis fitted she not only gave herself a long look at a birdie on the first hole but, with Swedish television in attendance, she drained it. The other three made par and Mohr laughs at the outrageousness of it: “I think Caroline Hedwall missed her putt because there were tears in her eyes.” Incredibly Caroline and her sister retained their title. The following year, and again in 2014, Mohr won the European Disabled Golf Championship.

She has continued to play golf – and was involved with the launch of the European Tour’s Golfers with Disability programme during the 2019 British Masters at Hillside – but increasingly her life has moved in another direction.

Her story has changed the lives of others, not just her own. Indeed, in late 2011 a mystery benefactor purchased an expensive Genium prosthetic leg for her, attaching a note which read: “I want you to have the chance to achieve your dreams. My wish is that you might have the opportunity to help someone else in the future.”

The enthusiasm, positivity and purpose which drove her are now refocused into new tasks and projects. “I’m a motivational and keynote speaker,” she explains. “I inspire the employees of companies to transform challenges into opportunities. Because when there is change, there will also always be resistance. Often it is from employees who may be fearful of adjusting or who preferred old and familiar ways.”

She has been hired by the likes of KPMG, Capital Group, BMW and Allianz. “My role is to help employees in these situations to discover a new perspective. Sometimes I talk for an hour, maybe with questions afterwards, sometimes we workshop. I use my life as a metaphor. Because my life and challenge might seem very intense, but it’s really not that different to anybody else.”

Mohr uses a few words, to sum up what happened to her, and it is hard to argue with them. “They took my leg,” she says, “but they gave me life.”