A Future Star in a Dream Car – Jude Russel 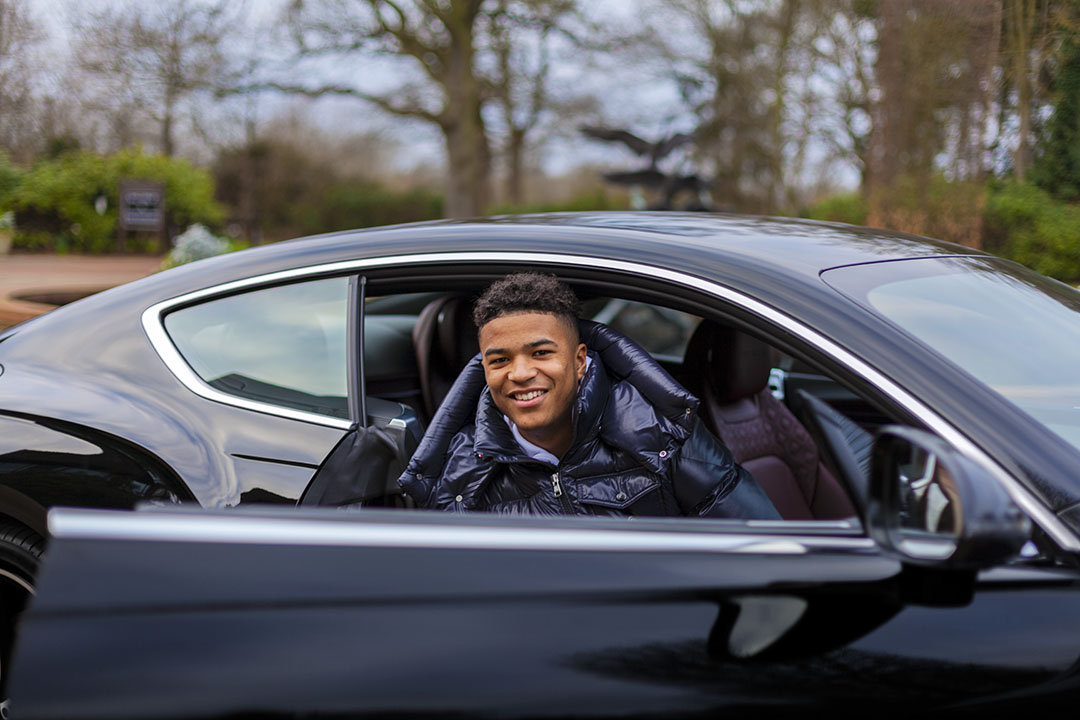 In this feature, we’re giving up-and-coming talents across all industries a taste of what stardom might feel like by taking them for a spin in a dream car, to a destination where they can experience effortless luxury first hand: The Wisley. Besides a golf lesson from the best in the industry, they also get a treat for the palate – in other words: a very nice lunch.

Sporty dream cars and 16-year-old boys are a match made in teenage heaven, so when I picked up Crystal Palace Under 18s defender Jude Russell in a brand new Bentley Continental GT it wasn’t surprising that his eyes lit up in excitement as the car rolled up in front of his family home. In true generation Z manner, a phone was quickly whipped out to take several pictures for friends, family and social media channels. Who could blame him though, seeing how impressive the jet-black car with the deep red interior looks.

Getting into the Bentley, the first pressing question is whose phone to connect to the infotainment system. Looking around the luxurious leather interior, the young footballer admits that he hopes to be driving something like this at some point in his career. “I like everything about it,” he says, laughing, as I ask what his favourite part of the Bentley is.

The engine starts with an impressive roar suggestive of the raw power that lies beneath the bonnet. The young footballer next to me seems to enjoy the ride, telling me about his experience of playing for Crystal Palace for the last nine years. “That’s the stadium right there,” he points out as we drive past Selhurst Park – only a ten-minute walk from his family home. He tells me proudly that his whole family has always supported the Eagles: “I think the first match I went to was when we were in the Championship and we were wearing a yellow kit with the TDK logo on it,” Jude said. “That was a long time ago.”

Jude has always known that he wants to become a professional footballer. Having grown up “always playing, talking and watching football,” he realised quite early on that he was good at it. Luckily it didn’t take long for others to recognise that too. At the tender age of 16, Jude is enrolled in the Crystal Palace Academy scholarship programme. In other words, at an age when most youngsters go to school, Jude heads to the Crystal Palace Academy every day, doing what he loves most.

Back in March 2017, he has been named EA Sports Academy Player of the Month, and last year The Guardian has listed the promising defender as one of the “20 best talents at Premier League clubs.” I’ve asked Jude how such early success has changed him. He answers confidently that it hasn’t. “My family keeps me firmly grounded and my team mates are all in the same situation. Of course, we are all competing for the few spots available in premiership football, but I think we all know that it is up to each one of us to make it happen. So we respect each other for the success we achieve.”

Dressed head to toe in designer clothes Jude certainly looks like a pro footballer. He admits that the appetite for the better things in life is part of the dressing room culture even at this level. I ask him what he thinks about the obscene amount of money premiership footballers get paid these days. “At the end of the day, footballers get into the game because they love playing football,” says Jude. “It’s not our fault that clubs pay so much money for players. Football is big business and every club is competing for the best. Of course, we are all hoping that in a couple of years it is us the clubs compete for”. And when you put things in perspective, who wouldn’t buy a Bentley Continental GT if it only sets you back a weeks’ wage.

Jude hopes to stay grounded. Having good friends and his family around him is very important. Jude says “I’m lucky to have great friends outside of football too. One of my best friends is a good basketball player; he was selected to play for England last year. He understands the dedication, commitment and compromises we need to make”.

I dig a little deeper, asking Jude about his thoughts on what makes a premiership footballer. He explains that most footballers his age get to a similar kind of level, but it’s determination and willingness to listen to the coaches that are the decisive factors in who makes it to the top and who doesn’t. To Jude, football is not just about what you can achieve on the pitch. “I’d say 60% is footballing ability; the other 40% is divided into things like your personality, attitude, commitment and ability to listen and learn.”

It becomes clear that Jude is a young man driven by ambition. Jude knows that the qualities that made him succeed so far are his adaptability and willingness to work hard every single day. He trusts his coach and is open to any criticism that will help him reach his dream of playing for the first team.

I ask Jude how his life differs from that of his school friends. “There are drawbacks, of course. I have to consider everything I do a bit more than most my age. I always have to be careful when I’m going out because I don’t want to be in the wrong place at the wrong time. I have to be sensible and mindful of what I’m doing all the time.” For Jude, it is always about the future. His focus lies steadily on what’s in front of him. His immediate goal is to play for the under 23s. One step closer to the first team.

We arrive at The Wisley and, to our surprise, the Bentley Continental GT has a similar effect at The Wisley as it had on the streets of South East London. Driving into the car park, surrounded by other luxury motors, people stop and point at the breathtaking car – it truly is a showstopper.

We’re greeted by Ian Cox, who is the Development Director at The Wisley. Our plan was for Jude to get a golf lesson at the exclusive golf club. However, when Ian asks him about it, he politely declines, explaining how he had picked up a minor injury in his last game against Bristol (Palace 2 : 1 Bristol), and that he doesn’t want to aggravate it with exercise he isn’t used to. Once again, the dedication to his career shines through, always trying to keep himself in the best possible shape. “I’m hoping to be selected to play in the under 18s FA Cup against Bolton next Friday”. As Ian shows us around the vast property, we’re greeted by various golfers enjoying their round of golf despite the rather dull weather. Everyone is so friendly, which makes for a really warm and welcoming atmosphere.

“I’ve played golf a few times when I was at Whitgift. We had a driving range there and everyone gets golf lessons for the first year,” explains Jude as Ian asks if he has ever tried out the game. If he was any good? “I was in year six when I did that. But I think I’m pretty decent. I did go to the driving range once with some of my teammates at Palace and I think I was better than most of them” he says, with a cheeky smile.

After having taken in the beautifully landscaped greens of the golf club, Ian kindly invited us to lunch, so we’re heading to the newly-refurbished clubhouse. It’s a beautiful space with an open and modern feel. We take a seat, and an attentive waitress is immediately by our side taking our orders. It’s a delicious Sunday roast for me and a juicy burger for Jude. What a very pleasant way to wrap up what has been a thoroughly enjoyable day out with a future star in a dream car.

Many thanks to Jude Russell for giving us an insight into his life as a Premier League Academy scholar. Thanks also to H.R. Owen for providing us with the dream car, the truly impressive Bentley Continental GT; and of course, thanks to The Wisley for hosting us!

Louis Blattler is a personal trainer and writer. His latest venture is focusing on helping golfers achieve physical peak. He writes predominantly about sport, fitness and cars and now future stars.