A Girl with a Dream 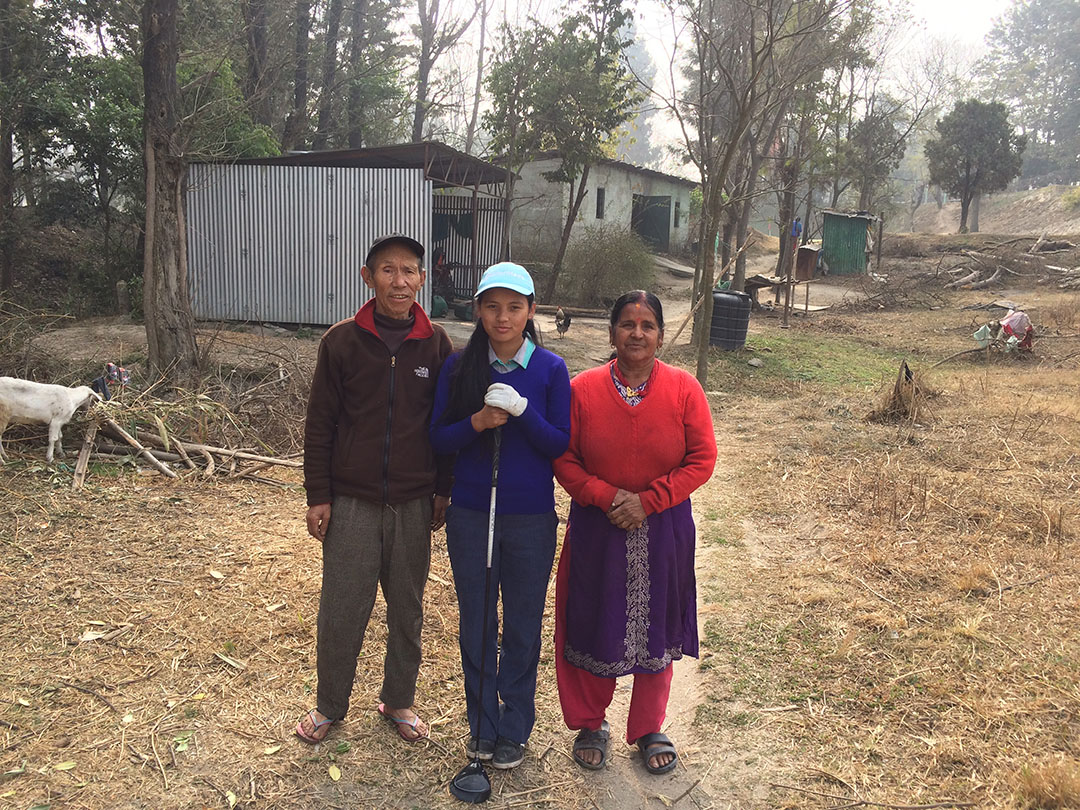 In late April 2018 Oliver Horovitz peered out from the third tier of Chelsea Piers driving range in Manhattan and smiled. In front of him a short girl was bashing balls into the far distance. They soared into the air, high above the Hudson River, crashed into the high netting and fell to the ground.

Around him he was acutely aware that fellow New Yorkers were assembling to admire this young golfer’s swing and her air of giddy excitement. No one asked any questions, yet their curiosity hung in the spring air. Horovitz took their cue.

“She got here yesterday,” he told them with a proud smile. “From Kathmandu in the Himalayas.”
“Really?” they gasped.
“Oh yeah,” affirmed Horovitz. “Really.”
“But how?” one of them asked. “How did that happen? How did she get here?”

Arrival at Tribhuvan International Airport in Nepal’s capital city is a dizzying experience. The road into the centre of Kathmandu is a riot of trucks and buses, tuk-tuks and carts, motorbikes and scooters. Engines throb, horns blare, the air is thick with fumes and dust.

As that road takes a sharp right and sweeps down the hill there is much to distract the newly-arrived visitor. A dirt track emerges from the jungle, freight lorries and tractors spitting sand high above the tree line. Food sizzles on stoves set up by vendors who sell to the tourists and mourners who are heading towards the Hindu cremation site of Pashupatinath. Its thick smoke drifts into the sky above the heads of the ash- and paint-smeared holy men who pose for photographs with foreigners for a fee.

This place appears to have little in common with Chelsea Piers in Manhattan and yet it does. Because beyond the traffic, the street food and the tourists is a high wire fence keeping this chaos separate from Royal Nepal Golf Club. Stood at that fence, their fingers coiled into the loops, are intrigued locals, their gaze fixed on a short girl readying herself to bash a ball into the far distance.

This young golfer is stood on the fifth tee, facing a shot to a tiny target 120 yards away. Distance is no problem. Instead she knows that anything short will disappear into scrubland and anything long will fly into the jungle. The raised green is bone hard and nothing but a handful of paces deep. Only a pure strike will hit the green and hold it.

“Who is this girl?” “What is this strange game she is playing?” “And why is she playing it with Americans and Europeans?”

Five hundred yards from that spot, in a dip between the third green and the fourth tee, is an equipment shed. Within the shed is a small room, home to Pasang Tsering, a greenkeeper; his wife Kalpana, a weed-picker, one of a team of ladies who walk the course in brightly-coloured saris, hand-picking rogue plants from the greens and fairways; and their daughter Pratima, the girl with big dreams.

When she was a small child Pratima watched the members at Royal Nepal play golf and was transfixed. She’d hunt the rough for balls and then hit them with clubs her father crafted from the branches of nearby trees. In time her skill and passion caught the eye of the new teaching professional Sachin Bhattarai, who persuaded the members to pass on their old clubs and allow her to play.

Six days a week Pratima would take the one-hour bus ride to and from school, but her real focus was returning to the place she calls home: Royal Nepal Golf Club’s nine holes and the community there which is in thrall to her. The ladies in saris are proud of their friend’s daughter, the caddies quietly point out that she is the best player in the country, Bhattarai is thrilled to teach such a willing student, and the members insist that every international visitor is introduced to her.

Nepal has no history of professional golfers competing beyond its border and the country has precious little experience of any international competition in any sport. Moreover, the nation is very traditional with women taking on conventional roles. Pratima knows all of this and has never let it steer her clear of her desires: she wants to turn professional and compete on the world stage. Her hero, her inspiration, is Tiger Woods.

In May 2016 Horovitz joined the story. He was on a golfing buddy trip with a difference: the golf courses of Nepal with added Himalayan trekking. A New Yorker by birth, Horovitz had found his spiritual home in St Andrews, where he caddied on the Old Course during his university days.

His love of the home of golf has seen him return for the annual Alfred Dunhill Links Championship, where he has caddied for rock star Huey Lewis and alongside Rory McIlroy. Auspicious experiences, and yet if you ask him for the best of the lot he answers: “Simple. The day I caddied for Pratima – one of the best days of my life.”

Those Royal Nepal members had insisted he and friends Miles Ashton and Vladimir Weinstein meet their favourite golfer and one thing led to another.

“We were on the fourth green and, as she’s putting, people are passing us on the street,” he explains. “They’re stopping and hugging the fence as they look through at what we’re doing.

“What they’re seeing is a local girl playing golf and an American guy carrying her bag. They’ve never seen that before. That moment was totally cool.

“It made me think: ‘This means something’. You could see that it clicked as they watched. It was transformative for me; she has a chance to inspire a whole generation of girls in Nepal, to really make an impact.”

Not characters to stand by, the three friends decided they had to act.

“We wanted to help her,” says Weinstein. “Whether that meant a new set of clubs, solid foundations for her career or the support of the international golf community. We got her story on video and her introduction alone was enough for the world to see her amazing personality.”

Horovitz adds: “Going to Nepal I expected new adventures, but I never expected to be inspired like this. Pratima Sherpa is my hero.”

Returning home, they set up teampratima.com.
It was a small snowball and over the next two years it hurtled down the slope. Pratima featured in magazines and online articles, readers reached out with donations and in the summer of 2017 Pratima and her coach visited California.

“It’s been wonderful to witness the outpouring of support from golfers around the world,” says Horovitz. “It reminds you that the world can really be good.”

Her journey to California was captured by ESPN, and the film they produced premiered at the Tribeca Film Festival in New York – hence the visit to Chelsea Piers.

Aged 18, over 7,500 miles from her home, Pratima stood on the red carpet and Horovitz says: “Her smile shone brighter than all the lights.”

But the excitement was far from over. A donor to the Tiger Woods Foundation had been at the viewing and approached Horovitz wiping tears from his eyes: “I’m heading down to Florida tomorrow for an event with Tiger. We have to get Pratima there.”

Three days later hundreds of guests were awaiting the arrival of the host at Medalist Golf Club. A buggy swept towards them and when it stopped the first word the driver, Tiger Woods, uttered was: “Pratima!” and the two embraced in a bear hug.

“Ten feet away,” says Horovitz, “everyone was crying.”

Back home Pratima returns to the range at Royal Nepal Golf Club (it doubles as the ninth fairway). It’s not quite like the range in Manhattan, but this girl has a dream and it isn’t yet realised. She’s working at it and she won’t stop.